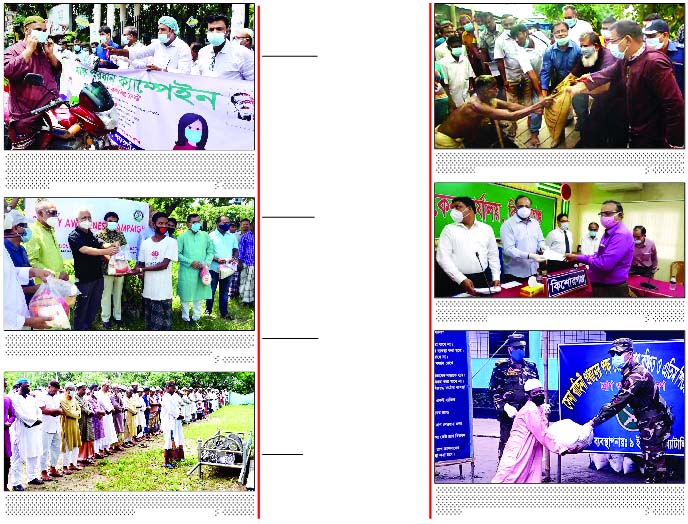 Number of corona patients rose to 551 in Bagerhat

A usurer arrested in Chitalmari

A usurer (money lender) named Refazul Khan (38) was arrested from Chitalmari Upazila in the district by the police on Saturday in connection with suicide of a school teacher named Hashikana Biswas who failed to repay money borrowed from him (Refazul) with exorbitant rate of interest, according to delayed report received here.
Refazul is the son of one Mostak Khan of village Aruabuni of the Upazila. Mir Shariful Khan, Officer-in-charge of Chitalmari Upazila said some unidentified persons are acceded in a case, where Refazul was suspected one. The OC added, after a primary interrogation Refazul was sent to the court.
A drug trader arrested

A drug trader named Humayun Kabir Hawladar alias Moyna (42) was arrested by the police from Katherpul area of Harikhali village in Bagerhat Pourasahva along with 150 Yaba pills on July 25.
It is learnt from the police that on an information a squad of police of Bagerhat Sadar Model PS raided the area and arrested the drug trader from there along with the Yaba pills.

15 sub-registrars in charge of different upazilas of the country have been transferred. The law, justice and parliamentary affairs ministry issued the order on Sunday. Among the 15 sub-registrars who have been ordered to be transferred are Tajpur in Sylhet and Bishwambharpur in Sunamganj.
The Inspector General, Registration, has been requested to transfer their responsibilities and join the new workplace by August 9.
Sub-Registrar of Tajpur in Osmaninagar upazila of Sylhet. Yunus from Thakurgaon to Haripur and Kalihati from Tangail. Tofazzal Hossain has been transferred to Tajpur. Besides, Md. Shafi Akramuzzaman from Bishwambharpur upazila of Sunamganj has been transferred to Ranishankail in Thakurgaon.