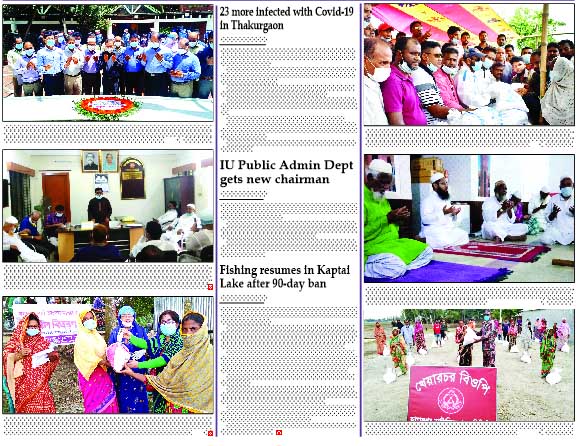 23 more infected with Covid-19 in Thakurgaon

Another 23 people, including a staff of deputy commissioner office and a bank official, have been infected with coronavirus in Thakurgaon.
With the new cases, the district's confirmed coronavirus cases have risen to 545 till Monday evening, said Civil Surgeon Mahfuzar Rahman.
Two staff of Haripur and Baliadangi upazila health complex, were among the newly-infected patients.
Meanwhile, 94 more samples have been sent to Dinajpur M Abdur Rahim Medical College Hospital on Monday for test.
So far 3,984 samples have been tested in the district.
Bangladesh's officially confirmed coronavirus cases went up to 260,507 with the detection of 2,907 new patients in 24 hours until Monday.
Besides, the death tally rose to 3,438 with 39 new deaths in the country.

Professor M Lutfor Rahman was appointed as the chairman of public administration department of Islamic University (IU) in Kushtia on Tuesday.
Acting Registrar SM Abdul Latif told UNB that Vice-Chancellor Professor M Harun-Ur-Rashid Askari appointed Lutfor to the post for the next three years.
He was appointed to the post as the tenure of previous chairman, Professor M Zulfiquar Hossain, came to an end, the registrar added.

Fishing in Kaptai Lake resumed on Tuesday at the end of a three-month ban imposed by the local administration to boost fish production.
Manager of Bangladesh Fisheries Development Corporation (BFDC) Lieutenant Commander M Touhidul Islam said fishermen went out to catch fish after midnight and returned with their catch at the BFDC ghat around 5am.
BFDC imposed a three-month ban on fishing in the Kaptai Lake from April 30 to allow the fish population to thrive. BFDC has released 30 tonnes of carp variety of fish fry in different parts of the lake during this year's fishing ban.
Touhidul said they were optimistic about high production this year.
BFDC have set up seven check-posts and six mobile monitoring centres to ensure breeding of fishes and assure that no-one can catch fish during the ban, he said.
Udoyon Barua, a fish trader and general secretary of Rangamati Fisheries Association, said some 22,000 fishermen are dependent on the Kaptai Lake.
The workers and fish traders are passing a busy time since morning, he said.

75 passengers landed in Sylhet from London
Sylhet Bureau
About a month later, a direct flight from London with 116 passengers arrived in Sylhet. Biman's BG-202 flight from London's Heathrow Airport landed at Sylhet MAG Osmani International Airport around 10:30 am on Monday.
Biman Bangladesh Airlines Sylhet District Manager Shahnewaz Majumder confirmed the matter and said there were 116 passengers on the direct flight from London to Sylhet on Monday morning. Of these, 65 passengers landed in Sylhet and the flight went to Dhaka with the remaining 51 passengers. The plane left for Dhaka after an hour's stay at Osmani Airport. He said 34 more passengers had gone to Dhaka from Sylhet on the same plane.
Meanwhile, the Osmani Airport authorities have examined the health of 65 passengers who immigrated to Sylhet. All of them had Corona Negative Certificates and no one had to be taken in isolation as they were physically healthy.