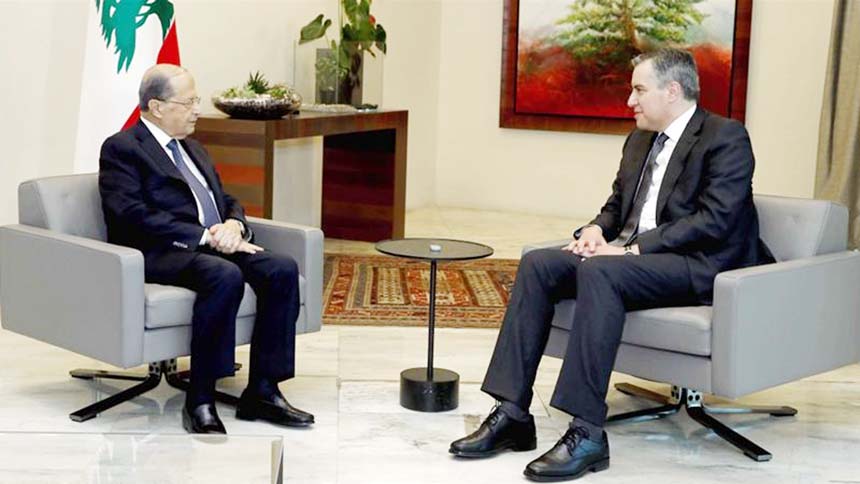 Al Jazeera News :
Lebanon's Prime Minister-designate Mustapha Adib has met Lebanon's president for more consultations over the formation of his cabinet - instead of presenting its lineup, as anticipated by some - raising doubts about meeting a deadline agreed with France.
Lebanese political leaders promised French President Emmanuel Macron in Beirut on September 1 that a government would be formed in two weeks, part of a plan drawn up by Paris to start reforms that would unlock much-needed aid for the crisis-hit nation.
"God willing, all will be well," Adib told reporters following his meeting with President Michel Aoun on Monday.
An official source had previously said the prime minister-designate, a Sunni Muslim under Lebanon's sectarian system of power-sharing, would present plans for his cabinet on Monday.
But on Sunday, Speaker of Parliament Nabih Berri - a top Shia politician and head of the Amal Movement, an ally of Hezbollah - said in a statement that his group opposed the manner the cabinet was being formed and did not want to join.
Berri cited a concern about a lack of consultation and what he called resorting to "foreign leverage" in forming the cabinet. The same phrase was used in a speech on Sunday by another Hezbollah ally, Christian politician Gebran Bassil.
Citing political sources, reports have said Berri's position towards the cabinet hardened after the United States imposed sanctions on allies of Hezbollah, a group Washington deems "terrorist" but which Paris says has a legitimate political role.
On Saturday, Macron spoke to Berri over the phone in an effort to remove an obstacle around the finance ministry post, which is traditionally controlled by Shias, according to a political ally of the speaker.
"The (French) president continues his calls with the various political players in Lebanon," the French presidential office said in a statement, without giving details about any discussions.
Adib, meanwhile, has so far made few public comments since his designation after the government of his predecessor, Hassan Diab, resigned in the wake of a devastating explosion in Beirut's port last month. Reports say the prime minister-designate wants to shake up the leadership of ministries, some of which have been controlled by the same groups for years.
Any government needs the blessing of the main Christian and Muslim factions to ensure it conforms with Lebanon's confessional power-sharing system. The process of forming a government has in the past taken many months.
Donors have demanded to see reforms before unlocking billions of dollars in aid that was originally pledged in 2018 but never disbursed.
Separately on Monday, the Lebanese army said four of its soldiers were killed while attempting to arrest a suspected "terrorist" in northern Lebanon.
The troops were trying to detain Khaled al-Tallawi, who heads a "militant cell" behind the August 21 murder of two police officers and the son of the mayor of Kaftoun village in the country's north, the army said.
Al-Tallawi opened fire and lobbed a hand grenade at the troops who raided his home in the Beddawi area near the northern port city of Tripoli late on Sunday, it added.
Three soldiers were killed on the spot while another was severely wounded and later succumbed to his injuries.
The army said al-Tallawi was later shot dead after soldiers chased him and affiliated men in a hunt that lasted into the early hours of Monday morning. Troops are still searching for other members of Tallawi's cell, it added.
Lebanese security forces have been chasing suspects over the Kaftoun murders for weeks.