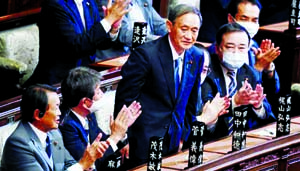 Yoshihide Suga is applauded after he was elected as Japan\'s Prime Minister by the lower house of the Diet in Tokyo on Wednesday.

BBC News :
Born in 1948 to a family of strawberry farmers, Yoshihide Suga's steady rise to the top sets him apart from the political elite that has long dominated Japanese politics.
Elected prime minister following the surprise resignation of Shinzo Abe on health grounds, Mr Suga is a close ally of the former PM who was seen as his fixer.
Mr Suga's political journey began when he worked on a parliamentary election campaign soon after graduating from Tokyo's Hosei University.
He later worked as a secretary to a Liberal Democratic Party (LDP) lawmaker, before embarking on his own political career.
He was elected to the Yokohama City Council in 1987, and in 1996 he was elected to Japan's Diet for the first time.
In 2005, Prime Minister Junichiro Koizumi appointed him senior vice minister of internal affairs and communication.
The following year, Mr Koizumi's successor Shinzo Abe promoted him to minister with three cabinet posts, which he held until 2007.
His relationship with Mr Abe continued when the latter returned as prime minister in 2012 and appointed him to the influential post of chief cabinet secretary.
Over the past eight years, Mr Suga remained in the spotlight with twice-daily media briefings and a reputation for managing Japan's complex bureaucracy.
As the administration's public face, he had the task of unveiling the name of the new imperial era in 2019, when it was confirmed that Emperor Akihito was standing down.
The new era under Emperor Naruhito was to be called Reiwa - meaning "beautiful harmony" - Mr Suga announced, earning him the affectionate nickname "Uncle Reiwa".
When Shinzo Abe announced on 28 August this year that he would step down as leader due to ill health, Mr Suga was widely expected to lead the race to succeed him.
By the time he formally announced his candidacy on 2 September, the party's leading factions had already pledged their support to Japan's longest-serving chief cabinet secretary.
With this backing, Mr Suga made history on 14 September by becoming the first LDP leader not belonging to a party faction or a political dynasty, paving the way for his formal election as prime minister two days later.
Following the tenure of Mr Abe, Japan's longest-serving leader, Yoshihide Suga potentially represents continuity and stability.
When he announced his bid for the LDP leadership, he said that he would continue Mr Abe's signature economic policy of "Abenomics", built on monetary easing, fiscal stimulus and structural reforms.
He also aims to revise Japan's pacifist post-war constitution to legitimise the Self-Defence Forces, a key platform of Mr Abe's agenda.
For now, however, his priority is dealing with the ongoing Covid-19 pandemic and its economic fallout.
Mr Suga plans to expand testing and procure adequate vaccines by the first half of 2021. He also seeks to revitalise regional economies by raising the minimum wage, promoting agricultural reforms and boosting tourism.
In terms of foreign policy, he is prioritising the longstanding US-Japan alliance and envisions a "free and open Indo-Pacific", and he also aims to maintain stable relations with China.
Mr Suga also aims to continue efforts to resolve the abduction of Japanese citizens by North Korea in the 1970s and 1980s, including seeking a meeting with Supreme Leader Kim Jong-un without preconditions.