Health Ministry did well in dealing with pandemic: PM 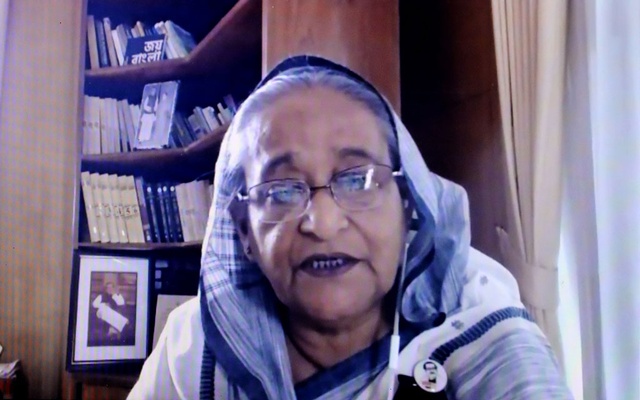 PM , Agriculture Minister Dr Muhammad Abdur Razzaque , Digital Bangladesh , Bangladesh coronavirus situation , Prime Minister Sheikh Hasina , Ministry of Health , 2020-21 fiscal year , Annual Performance Agreements
Prime Minister Sheikh Hasina on Thursday said the Ministry of Health showed its enough efficiency in checking the Covid-19 pandemic in the country by properly taking necessary measures in time.
âI think the Health Ministry has shown enough efficiency. Weâve been able to keep this Covid-19 under control as instant measures, which were necessary at that time, had been taken properly,â she said.
The Prime Minister was speaking at the signing ceremony of the Annual Performance Agreements (APAs) with ministries and divisions for 2020-21 fiscal year.
The APA and Integrity Awards were also distributed at the virtual function held at the Conference Room of the Public Administration Ministry. The Prime Minister joined the function from her official residence Ganobhaban through a videoconference.
Sheikh Hasina said many doctors, nurses and other health workers died going to serve patients risking their lives. âOur health workers donât sit idle,â she said.
Referring to huge criticisms of the Health Ministry, Hasina said many people say many things against the ministry. âThereâs a section of people who have the habit of criticizing [govt], but they themselves do nothing.â
Sheikh Hasina said her government has given permission to many private televisions and built the country as Digital Bangladesh. There is also electricity to run air conditioners, she added.
The Prime Minister said they once criticised it (govtâs move to make Digital Bangladesh), but now they keep spreading propaganda taking advantage of Digital Bangladesh. âI think it depends on self-confidence whether weâre on the right path, no matter who says what.âÂ Â Â Â  Â
The Prime Minister asked the government officials to work with self-confidence not paying attention to who says what.
âWhen you all do your own work, do that with self-confidence. You wonât be able to work if you pay heed to who says what or who does what. Youâll have trust in yourself. Youâll have to keep trust on whether youâre doing the right jobs. If you have this trust, the people of the country will be benefited from your works,â she said.Â  Â
Hasina asked the public servants to stand beside the people of the country as it is their duty to serve them. âItâs your duty to be there with peopleâ¦. You, who are in the government services, are pledge-bound to serve people. So, itâs your duty to serve people.â
Sheikh Hasina said they came to power with peopleâs mandate and that is why they are pledge-bound to people. âSo, itâs the duty of all of us to serve people.â
At the function, Agriculture Minister Dr Muhammad Abdur Razzaque, on behalf of the Prime Minister, signed the APAs, while senior secretaries and secretaries to the ministries and divisions inked those on behalf of their respective agencies.
The Agriculture Minister, on behalf of the Prime Minister, handed over crests and certificates to them for their outstanding performances in implementing APAs exercising integrity.