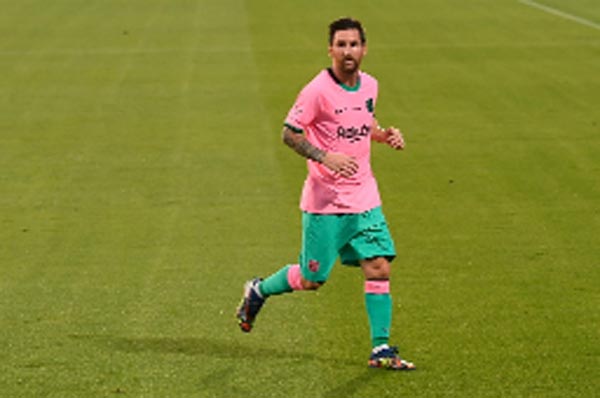 Lionel Messi celebrates after scoring during a friendly football match between FC Barcelona and Girona at the Johan Cruyff stadium in Sant Joan Despi near Barcelona on Wednesday.

AFP, Barcelona :
Lionel Messi scored twice on Wednesday as Barcelona beat second-division Girona 3-1 in a pre-season friendly match.
Messi helped set up Philippe Coutinho, back from his loan at Bayern Munich, for the first goal after 21 minutes.
The Argentine scored his first after 45 minutes, spinning on the edge of the penalty area and drilling a shot in off the base of the far post. He scored his second, with a deflected shot, after 50 minutes.
He went off after an hour.
Messi only returned to training at the start of last week after saying he wanted to leave the club.
Messi started Barcelona's first friendly on Saturday, playing 45 minutes without scoring in a 3-1 victory over third-tier Gimnastica Tarragona.
Earlier on Wednesday, La Liga president Javier Tebas said he was pleased Messi had stayed at Barcelona.
"Messi is important for our competition," said Tebas, at an event to promote the Liga sticker collection. "He is a player who was born in our competitionâ¦ and hopefully he will finish his career in our league."
Barcelona used 20 players in Wednesday's game at the club's training centre but neither Uruguayan forward Luis Suarez nor Chilean midfielder Arturo Vidal appeared.