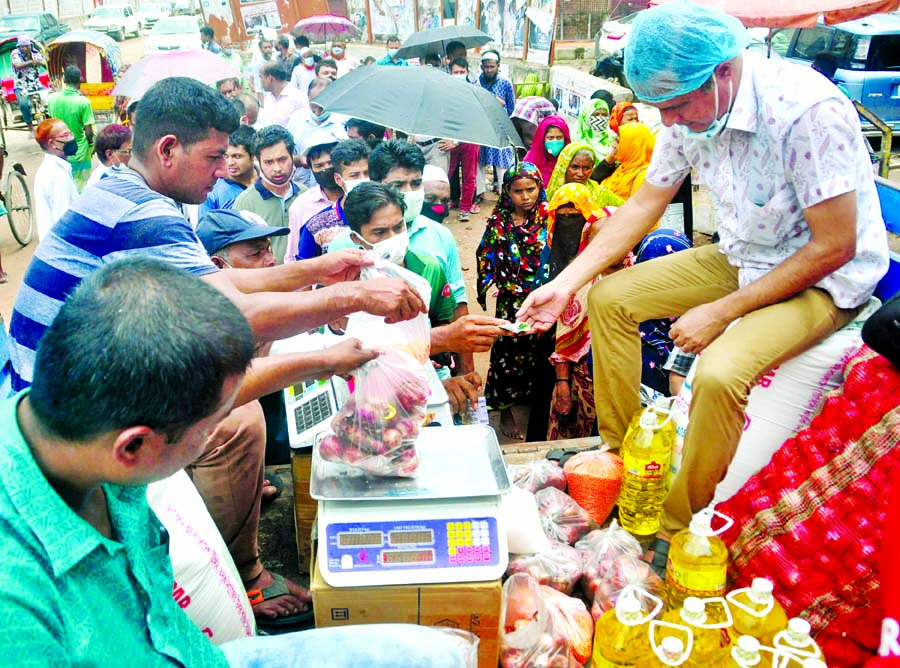 People standing in queues to buy onions from a makeshift truck shop of Trading Corporation of Bangladesh (TCB) in front of Bangladesh Secretariat on Thursday amid sky-rocketing onion prices in the market.

Staff Reporter :
Commerce Minister and importers are claiming adequate supply of onion in the markets though the price is still high.
Commerce Minister Tipu Munshi on Wednesday blamed a section of dishonest traders for onion price hike and assured of sufficient stock of onion in the markets and further measures.
It is said that the onion stocks are sufficient and import from Turkey and Egypt will give relief to the customers.
Prices in wholesale markets are as it was on Tuesday and Wednesday after India's ban on export to Bangladesh.
On Monday evening and Tuesday the traders increased onion prices per kg to Tk 100 and Tk 110 which was Tk 50 to 65 before Monday.
"There is no logic of increasing the ingredient's price as the traders did not purchase the item with hiked price.
India banned it to export now that did not means that the traders are importing it with high rate. They hike price overnight which is nothing but anarchy," said Abdul Quader, a job holder in Motijheel.
He said, "You see, the Commerce Minister, Commerce Secretary, even traders said, there is no crisis of the commodity but no one reduced the price which hiked suddenly after the news spread of Indian ban on its export."
Not only Abdul Quader, many consumers blamed government's inefficiency to control market prices of commodities.
Mohammad Hasan Ali, another private job holder said, the price hike of the item are found similar to last year.
"After the Indian export suspension news went on air, the onion price doubled from Tk 50-55 to Tk 100-110 overnight as per their whims. No body stopped them," said Hasan Ali. Â
The government failed to stop the syndicate to cut people's pocket increasing onion prices so high.
On Thursday indigenous variety was sold at Tk 75-78 per kg and in the capital's Karwanbazar and Shambazar similarly to previous two days.
The retail markets across the city also remained same as the grade one indigenous varieties were sold at Tk 100 to 110 and lower grade indigenous and Indian variety were sold at Tk 80. Mobile courts drives failed to reduce the price of the commodity yet.
Apart from these, Foreign Minister AK Abdul Momen on Thursday said that Indian Ministry of External Affairs was sorry for not informing Bangladesh before suspending onion export. "I heard that the Indian ministry of external affairs is very repentant. Because they did not know about the sudden ban," he said.
Momen made the remarks while talking to reporters at his office soon after his return from Turkey.Â  Bangladesh expects a positive outcome regarding Bangladesh's request to withdraw the export ban on onions soon.
Earlier, Bangladesh shared its 'deep concern' with India at the sudden ban on onion exports saying it undermines the discussions that took place in October last year and January this year.
In another development, as part of curbing the crisis Bangladesh Bank directed banks to keep LC margin on onion import at maximum nine percent.
The central bank today ordered banks to keep the interest rates reasonable used to import essential commodities, including onions, at maximum 9 percent.
In a circular, the Bangladesh Bank instructed banks to keep the margins on opening letters of credits (LCs) for importing onions at a minimum level.
The order would be effective until December 31 this year.