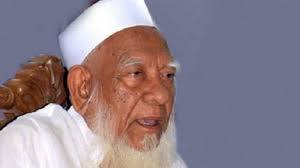 Shah Ahmed Shafi, chief of the radical Islamist group Hifazat-e Islam, has died in hospital care in Dhaka a day after he lost control of the Hathazari madrasa in Chattogram on his resignation as its director general.

He passed away at Asgar Ali Hospital at 6:40pm on Friday, said Maulana Abdur Rauf Yusufi, a leader of the organisationâs Dhaka metropolitan unit.

Shafi, believed to be 98, was suffering from weakness due to old age, diabetes, high blood pressure and respiratory distress for a long time.

He was airlifted to Dhaka from Chattogram in the afternoon when his health condition worsened.

He was taken to a hospital in the port city immediately after he resigned from the madrasa in a meeting of its governing council on Thursday night following two days of protests.

Hundreds of students demonstrated demanding the removal of his son Anas Madani as an assistant director of the institution.

The government shut the madrasa down on Thursday amid tensions after the demonstration.

Tension rose in the Hathazari madrasa in recent months over a leadership struggle as Shafi had fallen ill several times.

The protest for the removal of Anas followed a row between Shafiâs followers and the supporters of former assistant director Junayed Babunagri.

The dispute came out in the open when the Shura Committee replaced Babunagri with Sheikh Ahmed in June.

Al Jamiatul Ahlia Darul Uloom Moinul Islam, known as the Hathazari Baro Madrasa, has more than 7,000 students who learn lessons on the basis of the principles of Deoband school of Islam.

Shafi, the Muhtamim or director general of the madrasa, was also president of Bangladesh Qawmi Madrasa Board â Befaqul Madrisil Arabia Bangladesh.

Called the âBaro Hujurâ by Qawmi madrasa students, he was regarded by a section of Muslims as one of the top Islamic scholars in Bangladesh.

His radical views on some issues such as secular bloggers, statues and of women, however, had drawn criticism and angst on a number of occasions.-- bdnews24.com