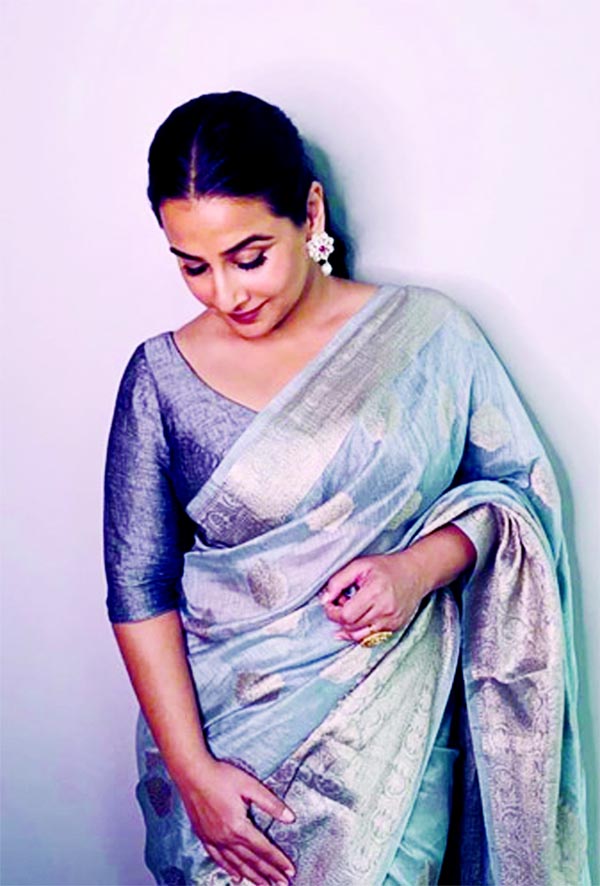 Vidya Balan is one of the most successful actresses of Bollywood, who has a vivid sense of fashion and style. Her fans and followers on social media and otherwise are aware and are in love with her fantastic collection of sarees. She recently shared a picture of herself Instagram, shot tactfully.
Vidya gracefully draped an ash grey Chanderi silk saree with a golden motif and border by Bovee.com, her hair styled back neatly by Shalaka Bhosle and her face illuminated in brown-toned makeup, winged eyeliner, and brown lipstick. She accessorised the look with a signature ring and matching earrings and is overall styled by Pranay Jaitley and Shounak Monkar from Who Wore What When.
Talking about the professional front, Vidya was last seen in a film, titled Shakuntala Devi. The movie also featured Dangal fame Sanya Malhotra, who portrayed the character of Anupama Banerji, daughter of Shakuntala Devi. The film narrated the story of the achievements and the ups and downs in the life of the late mathematician.
Apart from the full-length feature of the film, she was also seen in her first-ever short film, NatKhat, which told the story of a rural Indian woman, who endured domestic violence in her marriage. The actor will be next seen in Aastha Tikuâs Sherni. Helmed by Aastha Tiku, it will also star Vijay Raaz, Sharat Saxena and Mukesh Prajapati in pivotal characters.Â Â Â  -Agency