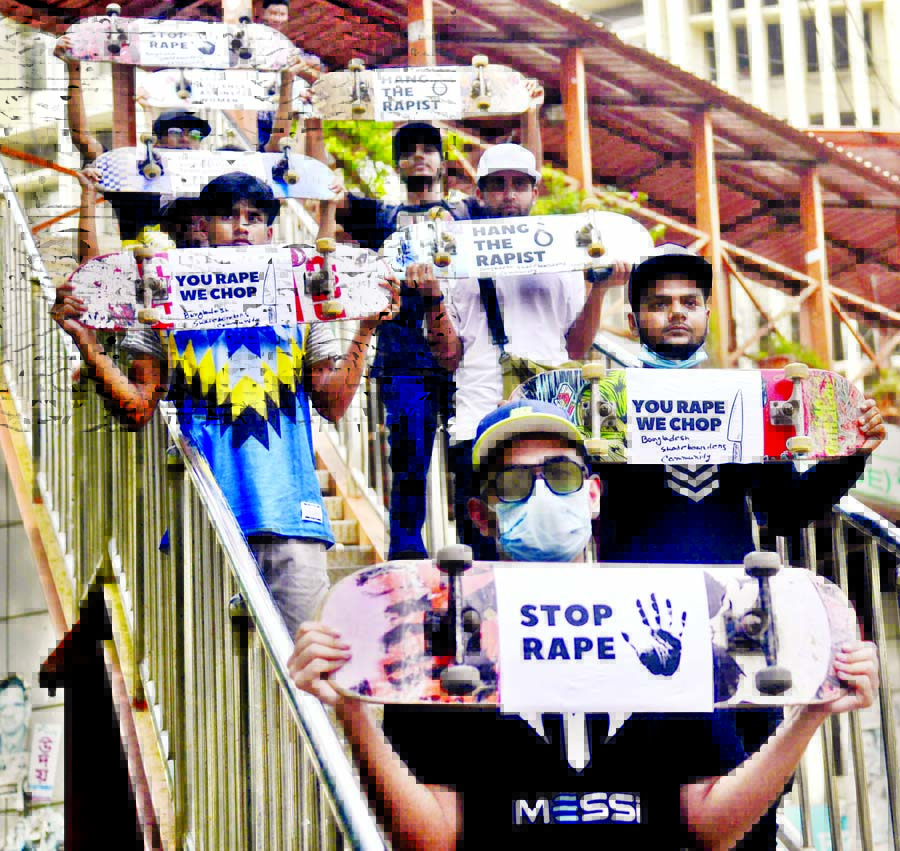 Students take to Shahbagh foot overbridge with placards during an anti-rape protest in the capital on Thursday.

Staff ReporterÂ  :
Mass protests, demonstrations and human chains against the ongoing rape incidents and violence against women and children continued across the country for the fourth consecutive day on Thursday, demanding justice.
Surprisingly , a group of Chhatra League workers reportedly attacked a peaceful demonstrationÂ  against incivility in Moulvibazr.
Meanwhile, demonstrations against the recent rape incidents and torture against women entered its fourth day at Shahbagh, TSC and other parts of the capital yesterday.
At Shahbagh, hundreds of demonstrators belonging to the leftist student organizations, carrying the banner of "Anti-Rape Movement" started their protests to free the country from rape, sexual harassment and violence against women. The protesters mainly students gathered outside the National Museum at 11am and chanted anti-rape slogans.
At that time, protesters demanded the resignation of Home Minister Asaduzzaman Khan Kamal for failing to prevent rape incidents across the country.
Most of the protesters say that ruling party men are mainly involved with most of the rape cases-from Sylhet's MC College to Noakhali's Begumganj.
They also said that a mass gathering would be held on Friday afternoon at Shahbagh to press home their demands.
At Dhaka University, protesters of the Dhaka University Teachers' Association (DUTA), on Thursday demanded speedy trials of rape cases.
Speaking at a human chain program, highest penalty was demanded.
Moreover, they want moral lessons to be included in the academic syllabus at schools. They said children should learn those lessons from school. Meanwhile, another human chain was formed in front of the Raju sculpture at Dhaka University on Wednesday afternoon, demanding highest penalty for those who are involved with rape and sexual harassment across the country, including Noakhali.
Film stars couple Omar Sani and Mousomi participated in the protest program.
In Moulvibazar, Chhatra League activists reportedly attacked a peaceful demonstration and injured five protesters.
This is unprecedented and it must not be allowed because it is incivility.
One of the protesters, said: "Me and my fellow classmates, along with a number of other student participants, took position in front of the Press Club at 11am on Thursday to continue participating in the anti-rape movement that has been rocking the nation."
Suddenly, activists of Chhatra League came in groups and swooped on us around 12pm, injuring several student protesters, she added.
Similar protests were also reported from Brahmanbaria, Mymensingh, Bhola, Tangail, Pabna and Kurigram.
Waves of anti-rape demonstrations started across the country after a video footage of five men gang-raping a housewife, stripping her and capturing the scene of the incident in Begumganj upazila of Noakhali, went viral on social media recently.
The incident occurred in Noakhali's Begumganj upazila at Joykrishnapur village of Eklashpur union on September 2.
Earlier, the housewife of Noakhali's Begumganj upazila was molested by some local miscreants at Ward No. 9 of Eklashpur Union of the upazila last month and a video of the barbaric incident went viral on the internet.
Five youths, including Delwar and his associates Badal, Kalam and Abdur Rahim, molested the housewife on September 2 this year.