Armenia and Azerbaijan agree to ceasefire 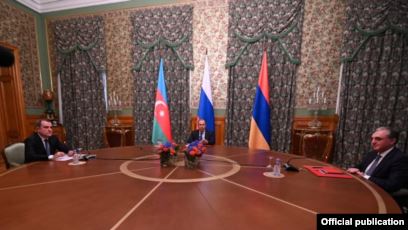 Reuters: Armenia and Azerbaijan agreed to a ceasefire starting on Saturday to exchange prisoners and bodies of those killed in the conflict between Azeri and ethnic Armenian forces over the Nagorno-Karabakh region, Russian Foreign Minister Sergei Lavrov said.
The talks were the first diplomatic contact between the enemies since fighting over the breakaway enclave erupted on Sept 27, killing hundreds of people. The ceasefire begins at 12 pm.
Lavrov, who mediated the negotiations in Moscow, announced the ceasefire at 3 am(midnight GMT) after 10 hours of talks with his Armenian and Azeri counterparts. He also said Armenia and Azerbaijan agreed to start talks on the settlement of the conflict.
Russia's top diplomat added that International Red Cross Committee would act as an intermediary in the humanitarian operation.
He did not provide details on the talks but said the Organization for Security and Co-operation in Europe's (OSCE) Minsk Group would mediate.
Armenian Foreign Minister Zohrab Mnatsakanyan and his Azeri counterpart Jeyhun Bayramov did not speak to reporters.
The mountain enclave belongs to Azerbaijan under international law but broke away in a war as the Soviet Union collapsed and is populated and governed by ethnic Armenians.
The renewed fighting in the decades-old conflict has raised fears of a wider war drawing in Turkey, a close ally of Azerbaijan, and Russia, which has a defence pact with Armenia.
The clashes have also increased concern about the security of pipelines that carry Azeri oil and gas to Europe.
The fighting is the worst since a 1991-94 war that killed about 30,000 people and ended with a ceasefire that has been violated repeatedly.
Azerbaijan said on Friday that 31 Azeri civilians had been killed and 168 wounded since Sept 27. It has not disclosed information about military casualties.
Nagorno-Karabakh said 376 of its military personnel and 22 civilians had been killed since the beginning of the conflict.