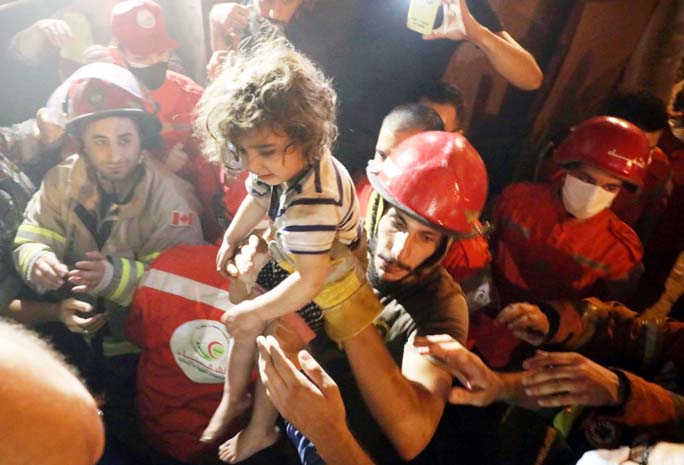 Rescuers carry a child evacuated from a building after a fuel tank exploded in Beirut.

Al Jazeera News :
A diesel tank exploded inside a building in Lebanon's capital, Beirut, on Friday night, killing four people and injuring several others, the Lebanese Red Cross has said.
The local Al-Jadeed network on Saturday reported that more than 30 people were injured in the blast as it broadcast images of flames in a street and sounds of people screaming in panic.
Lebanese Red Cross head Georges Kettaneh said the injured were transported to hospital, the national news agency ANI reported.
It was not immediately clear what triggered the blast in the western neighbourhood of Tariq Jadidah. The state-run National News Agency said the fire is likely to have erupted inside a bakery in the basement of the building, which may have caused the tank to explode.
"We were cleaning the street then suddenly a very strong explosion shook the place and everything starting falling down," said Ali Ghannam, a witness.
"A diesel or gasoline tank was blown in the air then fell down, causing fire and electricity cables to be cut, and people ran away," he added.
Fire brigade officer Ali Najm said the cause of the explosion was not yet known. Firefighters put out the blaze and helped residents stuck in their apartments to climb down ladders.
Lebanese troops were also deployed to the area and were seen pushing back the onlookers.
In the last few weeks, Beirut municipality has been looking for warehouses that could be in breach of the law or pose a danger to residential areas, Governor Marwan Aboud told Al-Jadeed.
"We feared such an accident could happen," Aboud said, adding that nearly 100 vulnerable sites had been identified. "We have ordered some of them to close and required others to put in place procedures to protect the public."
Private generator services proliferate across the country, sometimes accused of being veritable mafia profiting from electricity shortages, which have forced citizens for decades to resort to subscriptions to cope with frequent power outages.
The explosion came two months after a massive blast at Beirut's port killed nearly 200 people, injured about 6,500 others and caused damage worth billions of dollars.
Nearly 3,000 tonnes of ammonium nitrate, a highly explosive chemical used in fertilisers, exploded at the port on August 4. The material had been stored at the facility for six years.
It is still not known what ignited the nitrate but more than two dozen people, many of them port and customs officials, have been arrested since.
Friday also witnessed wildfires in both north and south of the country, concentrated mainly in the Chouf and Metn regions. Last year, wildfires raged in the south's forests due to unusually high temperatures in what was described as the worst in decades.