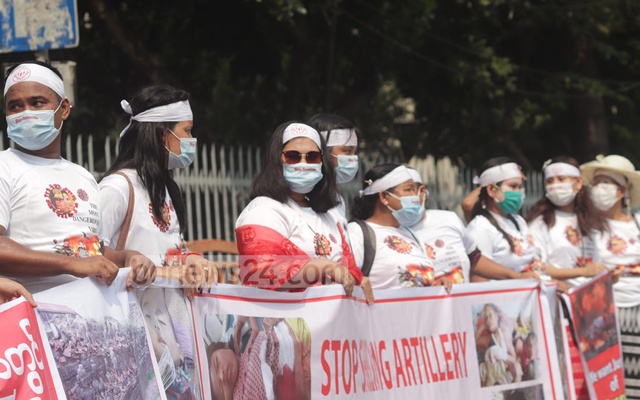 The Rakhine Community of Bangladesh has staged a protest in Dhaka against the killing, rape, arson attacks and other crimes against humanity in Myanmar's Arakan.
More than 300 civilians died in army raids on homes, while the crackdown left more than 600 injured, Kannyng, convenor of Bangladesh Rakhine Community of Bangladesh, alleged at a human chain protest on Sunday. "At least 250,000 people lost their homes and became refugees."
Myanmar's military has been cleverly and systematically infiltrating villages, torturing, raping, looting and firing on homes, he alleged.
"You all know that they are continuing the crimes against humanity without paying heed to the international laws. We have formed this human chain to highlight the issue to the international community."
As Myanmar bars the international aid agencies from entering the Rakhine province, they are unable to take food and medicines to the refugees, he said.
The Myanmar government has been "torturing the people from time immemorial". "In 1784, the notorious Burmese coordinator Wan led the genocide to wipe the Rakhine people and did not even spare religious structures. It has been continuing even today," he said.
"The perpetrators will continue their heinous crime if we don't protest and condemn them."
Protesters urged the international community, including the European Commission, Russia and China, to take necessary action, Kannyng said.
The Myanmar army has suspended the internet services in Rakhine to conceal information on the genocide, he complained.
"The Myanmar government has ignored the call of the World Health Organisation to ensure uninterrupted internet services amid the coronavirus pandemic."
The international community called for justice, when Gambia filed a complaint against Myanmar over the Rakhine massacre at the International Court of Justice, said Mofidul Haque, Liberation War Museum trustee.
The Independent Investigative Mechanism for Myanmar initiated an investigation into the massacre. The international community must put pressure on Myanmar, he said.