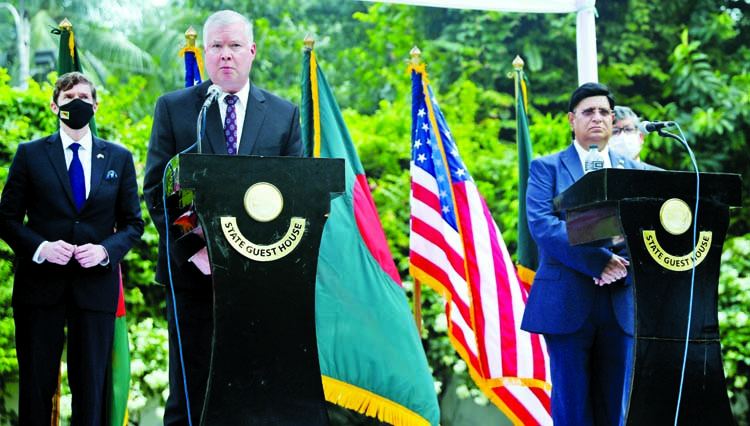 The regional and international community should redouble its efforts to resolve the Rohingya crisis, said US Deputy Secretary of State Stephen E Biegun.
"I want to emphasise that this requires a regional and global response where all countries need to work together shoulder to shoulder," Biegun said in a press briefing on Thursday following his meeting with Bangladesh Foreign Minister AK Abdul Momen. "It is not simply the responsibility of the government of Bangladesh, but a global priority."
"Every major country in the Indo-Pacific should be equally outspoken to ensure the Myanmar government takes the necessary steps to ease the crisis."
More than 700,000 Rohingyas fled and took refuge in Bangladesh after the Myanmar army launched a crackdown in Rakhine in 2017. Bangladesh had been already hosting 400,000 Rohingyas prior to the crackdown.
The Myanmar government signed a pact for Rohingya repatriation towards the end of 2017 after it came under pressure from the international community, but the repatriation never took place.
Despite several repatriation efforts, the Rohingyas refused to go back to Rakhine fearing the unsafe situation there.
Bangladesh has been voicing its demand for the repatriation of Rohingyas, but the initiatives fizzled out amid the coronavirus pandemic. Different countries, including the US, and the United Nations and other international organisations are providing humanitarian aid to the Rohingyas living in the refugee camps in Cox's Bazar. Though a 'long-term' joint response programme led by the United Kingdom and the United States are on the cards, Bangladesh wants to focus more on the repatriation of the Rohingya refugees to Rakhine. The joint response programme is slated to be discussed on Oct 22.
"We very much agree with the government of Bangladesh that a solution needs to be found based on restoration of the Rohingya's rights and leaving the refugee camp in Bangladesh," Biegun said referring to the difference between the new response plan and the previous one.
The US has been 'quite outspoken' on the Rohingya issue and used its political influence as much as possible to influence decisions inside Myanmar regarding the treatment and restoration of rights of Rohingya people, he said.
They discussed how to work together not only to meet the needs of the Rohingya population but also to coordinate the existing issues in order to reach a permanent solution and reduce the burden for Bangladesh, Biegun said about their meeting on Thursday.
The US sees Bangladesh as a key partner in the Indo-Pacific region and is committed for a growing partnership, Biegun said in the joint press briefing. "Bangladesh will be the centrepiece of our work in the region."
The repatriation of Bangabandhu murder convict Rashed Chowdhury was on agenda at the meeting, said Foreign Minister Momen. "The US attorney general looks after the matter and they will review it," he said.
The opening of a Bangladesh consulate in Miami has been approved, Biegun said.
"We look forward to broadening the official diplomatic presence of Bangladeshi friends to serve the interests of the American people and the large Bangladeshi American community, which is a robust part of the American society."
The US embassies are now suffering from a low workforce due to the ongoing COVID-19 pandemic, Biegun said when asked about the visa processing for the students willing to go to the US for higher studies.
There is no other obstacle now and it will be resolved when the vaccine arrives, he said.
Biegun arrived in Bangladesh on Wednesday on a three-day visit following his India tour.