Arabs join air attacks on IS 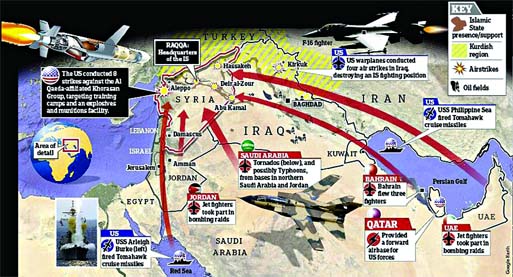 US warplanes have carried out new air strikes on Islamic State (IS) militants in Iraq and Syria, hitting vehicles and arms dumps, the US military says.Eight IS vehicles were damaged near Abu Kamal on the Syria-Iraq border, and two others in Deir al-Zour in the east of Syria, the US Central Command said.In Iraq there were strikes on IS targets west of Baghdad and southeast of Irbil, near Kurdish territory.Earlier there were air strikes on IS near the border with Turkey.Syrian activists reported strikes around the Kurdish town of Kobane, which has been besieged by IS fighters for several days. Witnesses saw two military aircraft approaching from Turkey but Turkish officials denied its airspace or bases had been used in the attack.The US-led coalition expanded its raids against IS into Syria on Monday. But the aerial bombardment near Kobane, which happened at about 01:00 local time (22:00 GMT), has not been confirmed by the US or any coalition member. Turkish military sources said neither its air force nor the US airbase at Incirlik in southern Turkey had been used.IS has seized large areas of Syria and Iraq, and the US has launched nearly 200 air strikes in Iraq since August.The IS advance has created a refugee crisis in neighbouring Turkey. Aid agencies said some 130,000 Kurdish refugees, most of them from Kobane, crossed into Turkey at the weekend.Meanwhile, UK Prime Minister David Cameron said an international coalition was needed to "destroy" IS, adding that it was a fight "you cannot opt out of".The Dutch government is also considering military action and will hold a special cabinet meeting on Wednesday to discuss deploying four F-16 fighter jets. Turkey had initially refused to take part in military action against IS, but President Recep Tayyip Erdogan signalled a possible change in policy on Tuesday. "We will give the necessary support to the operation. The support could be military or logistics," he told reporters in New York, where he is attending the UN General Assembly meeting. US President Barack Obama has hailed the support of Arab nations in air strikes against IS, saying: "This is not America's fight alone." The US said Saudi Arabia, the United Arab Emirates, Jordan, Bahrain and Qatar had all "participated in or supported" the strikes.