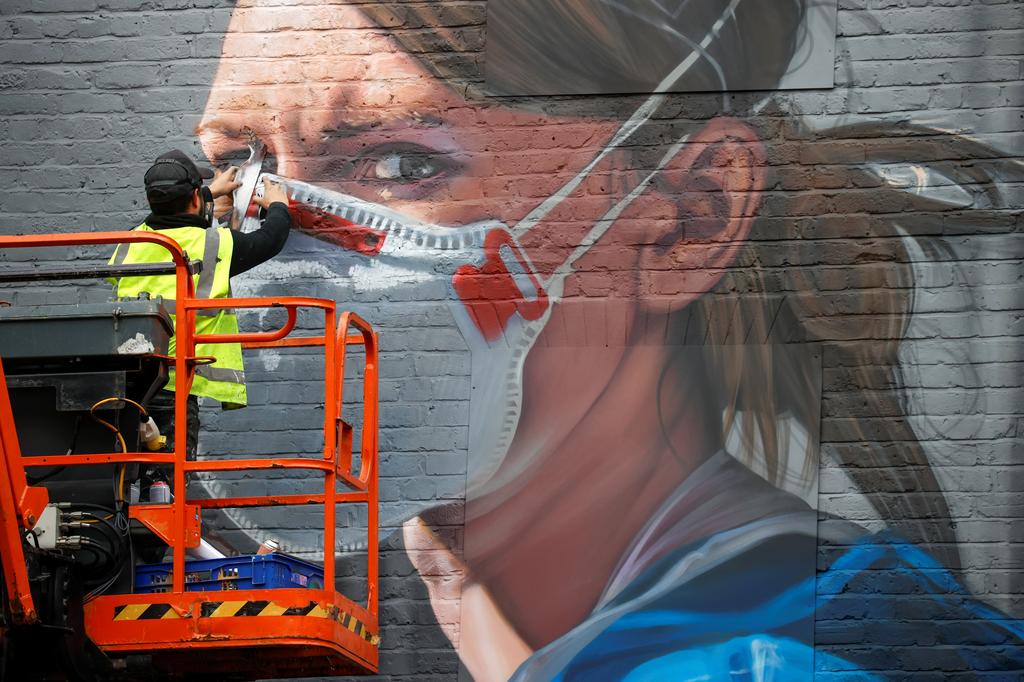 An artist works on a mural as the coronavirus outbreak continues, in Manchester, Britain on Sunday.

Reuters, London :
About six million people in the United Kingdom face tougher COVID-19 lockdowns in coming days as Wales and Manchester, the country's third largest city, mull additional restrictions as the novel coronavirus outbreak accelerates.
The United Kingdom recorded 16,982 new daily cases of COVID-19 in the space of 24 hours, according to government data issued on Sunday, up from 16,717 the previous day.
After a public row with Greater Manchester Mayor Andy Burnham, who accused Prime Minister Boris Johnson of attempting to sacrifice the north of England to save jobs in the south, Housing Secretary Robert Jenrick said a lockdown could be imposed within days.
"We do need to conclude this," Jenrick said of talks with local leaders, adding that the basis for an agreement was there.
Johnson has threatened to put the area into "Tier 3" - the highest level of restrictions forcing pubs and bars to close and banning different households from mixing indoors - against the will of local leaders if agreement is not possible.
Jenrick said he was hopeful a deal could be struck with Manchester leaders on Monday, with newspapers reporting that tens of millions of pounds were on offer to help businesses cope with the lockdown measures.
"Delay will only make the situation worse, will only put people's lives at risk, and will only make the economic fallout for the city worse in the long term," Jenrick told BBC TV.
The devolved Welsh government is also due on Monday to announce a possible 'fire break' set of additional measures to control the virus. Welsh First Minister Mark Drakeford is due to make a statement.
"There is a growing consensus we now need to introduce a different set of measures and actions to respond to the virus as it continues to spread across Wales more quickly during the autumn and winter months ahead," a spokesman for the Welsh government said.
Jenrick said a short, nationwide full lockdown was not a "sensible" way forward and was not being considered at present.