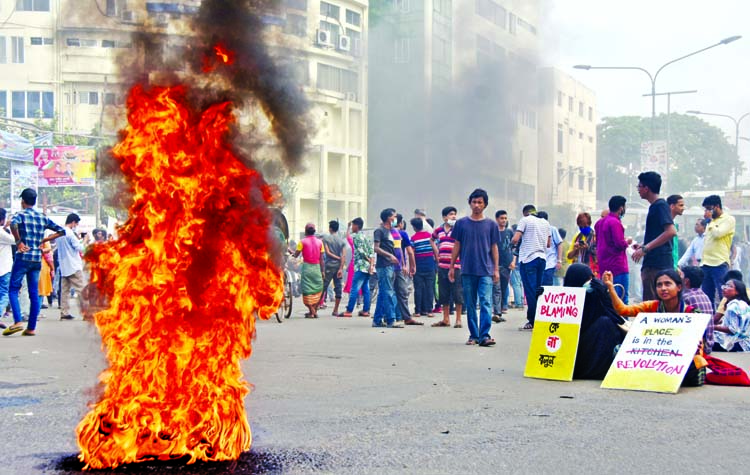 Members of Progressive Student Group block Shahbagh Square in the capital on Wednesday to protest against the attack on the anti-rape \'long march\' in Feni.

Staff ReporterÂ  :
Many leftist student organizations have again blocked the Shahbagh key intersection in the capital protesting the rape and oppression of women across the country and also demonstrated against the recent attack on anti-rape long march in Feni in which around 20 protesters were injured.
The program was carried out under the banner of "Bangladesh against rape and oppression" as part of the previously announced program.
As a result, transports on the busy roads remained suspended, causing immense sufferings to the members of the public.
Around 300 protesters belonging to various leftist and socio-cultural organisations including leaders and activists of Chhatra Union, Samajtantrik Chhatra Front and Chhatra Federation took to the street around noon and staged a sit-in programme there to press home a nine-point demand on Wednesday.
In the protest, they also demanded the resignation of Home Minister Asaduzzaman Khan Kamal for "failing" to prevent rapes across the country.
However, anti-rape protesters have also called off their movement after blocking Shahbagh intersection for two hours to protest the attack on their anti-rape long march on October 17.
Earlier a long march protesting against the recent ongoing incidents of rape, sexual harassment and violence against women, came under attack in Feni on Oct 17.
After the attack, the leaders of left-leaning organisations, who organised the march, blamed local Awami League and Jubo League leaders for the assault.
Protests against rape and violence against women erupted across the country since the beginning of October, following the recent incidents of gang rape in Sylhet's MC College and in Noakhali's Begumganj upazila.
Mentionable it is that in the wake of widespread protests against the growing incidents of rape, the President promulgated an ordinance incorporating the provision of death penalty as the highest punishment for the crime.