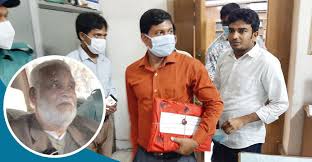 Authorities have issued a death reference against Jatiya Party leader and former state minister Syed Mohammed Kaiser for crimes against humanity during the 1971 Liberation War, following the publication of the Supreme Court verdict full copy.
They have received a full copy of the verdict from the Supreme Court on Wednesday, said Sayeed Ahmad, registrar of the International Crimes Tribunal.
âWe have issued the death reference today, as per the law and forwarded it to the Dhaka Central Jail. A copy of the document has been sent to the law ministry, the home ministry and the Dhaka DC office.â
The jail authorities will read out the death reference to the convict.
A Muslim League leader in 1971. Kaiser may appeal for a review of the death sentence. The execution will take place any day if he does not seek a review in 15 days of the verdict publication.
But no war-crimes convicts in the past were successful in getting the capital punishment scrapped after a review petition.
As per the law, Kaiser is allowed to file a petition for a presidential pardon to evade the gallows if his review petition is turned down. In case of failing to get a presidential pardon, the countdown will begin for his execution. He will be allowed to meet his family for the last time before the execution.
A Muslim League leader in 1971, Kaiser was sentenced to death on Dec 23, 2014, after