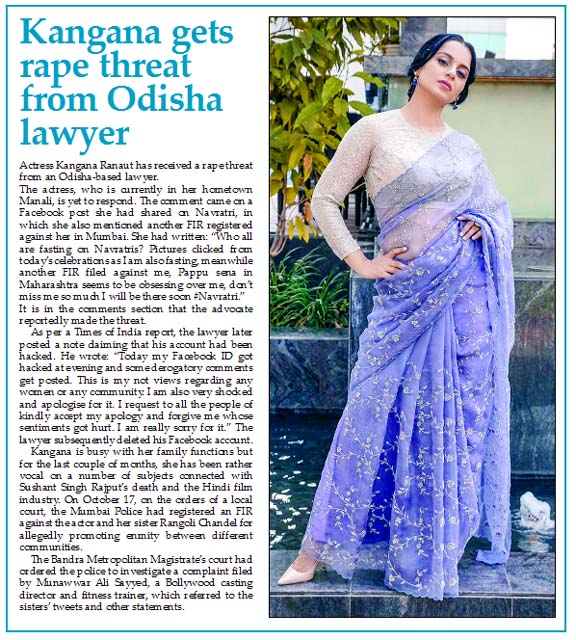 Actress Kangana Ranaut has received a rape threat from an Odisha-based lawyer.
The actress, who is currently in her hometown Manali, is yet to respond. The comment came on a Facebook post she had shared on Navratri, in which she also mentioned another FIR registered against her in Mumbai. She had written: âWho all are fasting on Navratris? Pictures clicked from todayâs celebrations as I am also fasting, meanwhile another FIR filed against me, Pappu sena in Maharashtra seems to be obsessing over me, donât miss me so much I will be there soon #Navratri.â
It is in the comments section that the advocate reportedly made the threat.
As per a Times of India report, the lawyer later posted a note claiming that his account had been hacked. He wrote: âToday my Facebook ID got hacked at evening and some derogatory comments get posted. This is my not views regarding any women or any community. I am also very shocked and apologise for it. I request to all the people of kindly accept my apology and forgive me whose sentiments got hurt. I am really sorry for it.â The lawyer subsequently deleted his Facebook account.
Kangana is busy with her family functions but for the last couple of months, she has been rather vocal on a number of subjects connected with Sushant Singh Rajputâs death and the Hindi film industry. On October 17, on the orders of a local court, the Mumbai Police had registered an FIR against the actor and her sister Rangoli Chandel for allegedly promoting enmity between different communities.
The Bandra Metropolitan Magistrateâs court had ordered the police to investigate a complaint filed by Munawwar Ali Sayyed, a Bollywood casting director and fitness trainer, which referred to the sistersâ tweets and other statements.