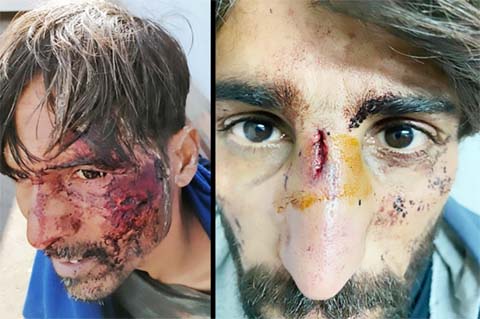 Al Jazeera News :
Refugees and migrants have sustained "severe injuries" after having allegedly been whipped, beaten and sexually abused at the hands of Croatian authorities during their attempts to reach western Europe for asylum.
Last week, the Danish Refugee Council (DRC) collected testimonies from more than 70 refugees and migrants at the Miral camp in western Bosnia who said they experienced violent pushbacks by Croatian authorities.
The route through the Bosnia-Croatia border is popular with refugees attempting to cross into EU-member Croatia from Bosnia, with the aim of reaching Western Europe.
Human rights groups have long accused Croatian authorities of violent pushbacks, while many say refugees have also been robbed of their belongings in the process.
But the latest testimonies collected by DRC, sent to Al Jazeera on Wednesday, mark an escalation with reports of sexual abuse and "extreme violence".
The victims include refugees from countries including Afghanistan, Pakistan, Bangladesh and Morocco.
According to their testimonies, four Afghan victims aged 16 to 24 crossed the border and were detained by Croatian police. They were transported on October 14 to an unknown location in Croatia and handed over to 10 armed people, dressed in black with their faces fully covered with balaclavas.