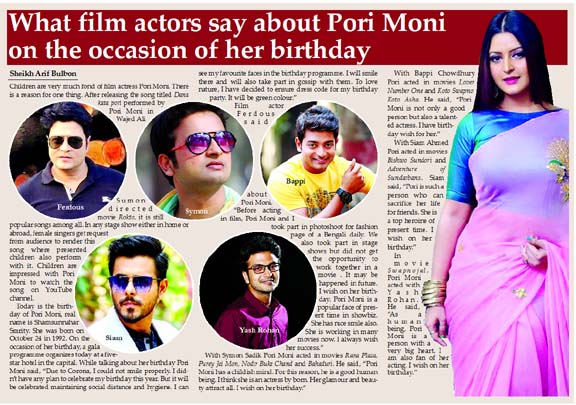 Sheikh Arif Bulbon :
Children are very much fond of film actress Pori Moni. There is a reason for one thing. After releasing the song titled Dana kata pori performed by Pori Moni in Wajed Ali Sumon directed movie Rokto, it is still popular songs among all. In any stage show either in home or abroad, female singers get request from audience to render this song where presented children also perform with it. Children are impressed with Pori Moni to watch the song on YouTube channel.
Today is the birthday of Pori Moni, real name is Shamsunnahar Smrity. She was born on October 24 in 1992. On the occasion of her birthday, a gala programme organizes today at a five-star hotel in the capital. While talking about her birthday Pori Moni said, âDue to Corona, I could not smile properly. I didnât have any plan to celebrate my birthday this year. But it will be celebrated maintaining social distance and hygiene. I can see my favourite faces in the birthday programme. I will smile there and will also take part in gossip with them. To love nature, I have decided to ensure dress code for my birthday party. It will be green colour.â
Film actor Ferdous said about Pori Moni, âBefore acting in film, Pori Moni and I took part in photoshoot for fashion page of a Bengali daily. We also took part in stage shows but did not get the opportunity to work together in a movie . It may be happened in future. I wish on her birthday. Pori Moni is a popular face of present time in showbiz. She has nice smile also. She is working in many movies now. I always wish her success.â
With Symon Sadik Pori Moni acted in movies Rana Plaza, Purey Jai Mon, Nodir Buke Chand and Bahaduri. He said, âPori Moni has a childish mind. For this reason, he is a good human being. I think she is an actress by born. Her glamour and beauty attract all. I wish on her birthday.â
With Bappi Chowdhury Pori acted in movies Lover Number One and Koto Swapno Koto Asha. He said, âPori Moni is not only a good person but also a talented actress. I have birthday wish for her.â
With Siam Ahmed Pori acted in movies Bishwo Sundori and Adventure of Sundarbans. Siam said, âPori is such a person who can sacrifice her life for friends. She is a top heroine of present time. I wish on her birthday.â
In
movie Swapnojal, Pori Moni acted with Yash Rohan. He said, âAs a human being, Pori Moni is a person with a very big heart. I am also fan of her acting. I wish on her birthday.â