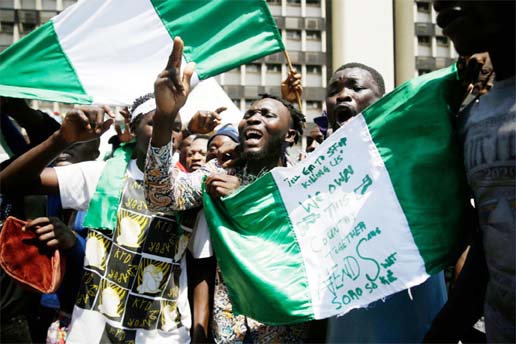 Protesters are calling for police reforms and an end to corruption.

Al Jazeera News :
Nigeria's president announced 51 civilians were killed in unrest following days of peaceful protests over police abuses and blamed "hooliganism" for the violence while asserting security forces used "extreme restraint".
President Muhammadu Buhari's comments in a statement released late Friday are expected to further inflame tensions after Amnesty International reported soldiers shot and killed at least 12 demonstrators Tuesday night as a large crowd sang the national anthem.
Buhari also said 11 policemen and seven soldiers had been killed by "rioters" as of Thursday, and "the mayhem has not stopped".
He said another 37 civilians were injured. He was speaking to a special meeting with former heads of state and other officials on the way forward after some of Nigeria's worst turmoil in years.
"Many lives have been lost" in Nigeria's unrest, the president's office announced Friday, as the government said days of peaceful protests over police abuses had been hijacked by thugs.
In a national address Thursday, Buhari did not mention the shootings that sparked international outrage. The president instead warned protesters against being used by "subversive elements" and "undermining national security and law and order".
He reiterated that Friday, saying the government "will not fold its arms and allow miscreants and criminals continue to perpetrate acts of hooliganism".
Soldiers remained in parts of Lagos, Nigeria's largest city, as a 24-hour curfew remained in place.
A witness of Tuesday night's deadly shooting, 33-year-old Isaiah Abor, ventured out anyway to visit the scene where soldiers opened fire. He managed to escape the bloodshed.
"When [the soldiers] were making comments that the flag is not bulletproof - that's when I knew this was going to go out of hand," Abor said. Empty ammunition shells still littered the ground.
The president's speech annoyed him. "The blood that stained a whole Nigerian flag, those youths were not even mentioned," Abor said.
"We are not cowards. We will always come to this ground, and we will always feel for those that are gone," Abor said.
Another protester, Olatunde Joshua Oluwanifemi, said: "The speech killed our spirit."
Okechukwu Nwanguma, with the Rule of Law and Accountability Advocacy Center, said the president's comments, "devoid of sympathy", were worrying.