US close to result as Biden takes lead in key states 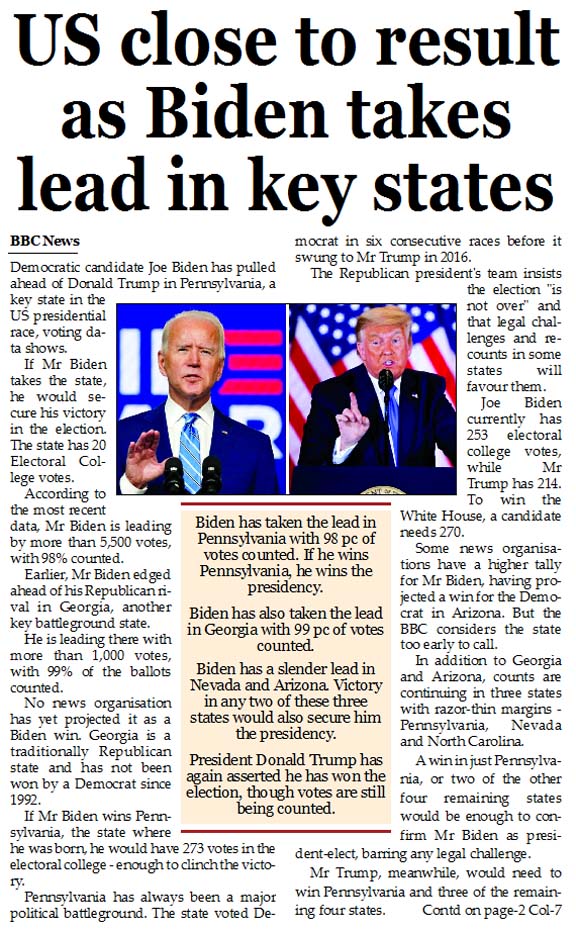 BBC News :
Democratic candidate Joe Biden has pulled ahead of Donald Trump in Pennsylvania, a key state in the US presidential race, voting data shows.
If Mr Biden takes the state, he would secure his victory in the election. The state has 20 Electoral College votes.
According to the most recent data, Mr Biden is leading by more than 5,500 votes, with 98% counted.
Earlier, Mr Biden edged ahead of his Republican rival in Georgia, another key battleground state.
He is leading there with more than 1,000 votes, with 99% of the ballots counted.
No news organisation has yet projected it as a Biden win. Georgia is a traditionally Republican state and has not been won by a Democrat since 1992.
If Mr Biden wins Pennsylvania, the state where he was born, he would have 273 votes in the electoral college - enough to clinch the victory.
Pennsylvania has always been a major political battleground. The state voted Democrat in six consecutive races before it swung to Mr Trump in 2016.
The Republican president's team insists the election "is not over" and that legal challenges and recounts in some states will favour them.
Joe Biden currently has 253 electoral college votes, while Mr Trump has 214. To win the White House, a candidate needs 270.
Some news organisations have a higher tally for Mr Biden, having projected a win for the Democrat in Arizona. But the BBC considers the state too early to call.
In addition to Georgia and Arizona, counts are continuing in three states with razor-thin margins - Pennsylvania, Nevada and North Carolina.
A win in just Pennsylvania, or two of the other four remaining states would be enough to confirm Mr Biden as president-elect, barring any legal challenge.
Mr Trump, meanwhile, would need to win Pennsylvania and three of the remaining four states. Â
Pennsylvania Secretary of State Kathy Boockvar told a press conference earlier that most ballots would be counted by Friday, but the race was still too tight to declare a result.
Mr Trump has cut the Democratic candidate's lead in Arizona to about 47,000 votes. The BBC's partner CBS News has categorised the state, which carries 11 electoral college votes, as a "likely" win for Mr Biden
He had a lead of more than 76,000 in North Carolina (15 electoral votes) with 96% of votes tallied.
In Nevada, Mr Biden has an edge of more than 11,000 over Mr Trump. The state has six votes under the electoral college system. An election official there said the results from more than 51,000 postal ballots would be updated on Friday
A senior Trump administration official told CBS Mr Trump did not plan to concede if Mr Biden ultimately declared victory.
What have the candidates said?
Mr Trump has made unsubstantiated claims of election fraud.
Speaking from the White House on Thursday, the president said: "If you count the legal votes, I easily win. If you count the illegal votes they can try to steal the election from us."
Beyond allegations of irregularities, the Trump campaign has not presented any evidence of election fraud.
The president added: "We were winning in all the key locations, by a lot actually, and then our numbers started getting miraculously whittled away in secret."
"There's been a lot of shenanigans and we can't stand for that in our country," he said.
Mr Trump actively discouraged his supporters from voting by mail, while Mr Biden urged his voters to do so, and it is these postal ballots that are now being tallied in the key states.
Election analysts also say the president's claims of Democratic electoral corruption are undermined by the better-than-expected performance of his fellow Republicans in congressional races across the map.
Several US networks cut their feeds of Mr Trump's speech, while numerous Republicans criticised the remarks.
Maryland Governor Larry Hogan tweeted there was "no defence" for the president's comments "undermining" America's democratic process.
In a brief televised address, Mr Biden appealed for calm across the country and again expressed confidence he would be declared the winner.
"Democracy is sometimes messy," he said. "It sometimes requires a little patience as well."
"The process is working. The count is being completed. And we'll know very soon."
As results trickle in, protests involving both sides have been held in major cities over the vote counting.
What legal action has the president taken?
Mr Trump has filed a barrage of lawsuits alleging irregularities and lack of transparency.
The president demanded a recount in Wisconsin, as is the right of any candidate who comes within 1% of his rival in total vote there.
But Mr Biden was leading by 20,000 votes in Wisconsin, and election analysts say previous recounts in the state have usually only altered the final tally by a few hundred votes.
media caption"What do you mean? They're still counting the votes": Newsnight's Emily Maitlis clashes with Republican Randi Reed
Trump campaign lawsuits filed in Michigan and Georgia were tossed out by state courts on Thursday.
But in Pennsylvania, the Trump campaign won a legal victory when a state appeals court judge said Republican poll-watchers must be permitted a closer look at ballot processing.
The Republican party in Nevada said it had sent a report to the US Department of Justice on what it alleged were "at least 3,062 instances of voter fraud".
The party tweeted that thousands of individuals had been identified violating the law by casting ballots after moving out of the state.
Biden attorney Bob Bauer said the lawsuits were legally "meritless" and designed "to message falsely about what's taking place in the electoral process".