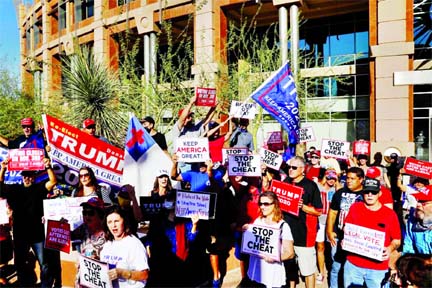 Supporters of US President Donald Trump hold signs and chant slogans during a protest about the early results of the 2020 presidential election, in front of the Phoenix City Hall, in Phoenix, Arizona on Thursday.

The Washington Post :
Joe Biden will get an increased Secret Service security detail in anticipation for a possible 2020 election win and acceptance speech in Delaware, according to The Washington Post.
Quoting two people familiar with the plans, the Post reported that the Secret Service will send reinforcements to Wilmington on Friday as his campaign prepares for Mr Biden to potentially claim victory.
The campaign alerted the Secret Service that the Democratic candidate would continue using a convention centre in Wilmington for a least another day, where he could make a major speech as early as Friday.
While the additional security wouldn't equate to the full protective detail of a president-elect, the outlet reported that it moves the number of agents around the former vice president closer towards that. Neither the Secret Service nor the Biden campaign commented to the Post's report.
The final result of the US election is expected to be called in the early hours of the Friday morning or during the day depending on the counts in Pennsylvania and Georgia, with Arizona, Nevada and North Carolina expected to follow.
While Mr Biden is currently favoured to reach the 270 electoral college votes needed to claim the presidency, Donald Trump claimed on Thursday that unnamed opponents were "trying to rig an election".
His campaign has launched multiple lawsuits to delay the ballot-counting process in a number of states, including Pennsylvania and Georgia.
If Mr Trump refuses to concede in the face of the electoral college being called in favour of Mr Biden, the Secret Service could choose to keep the status quo in protecting both candidates while the legal fight plays out.