Some Americans dance, others wield guns 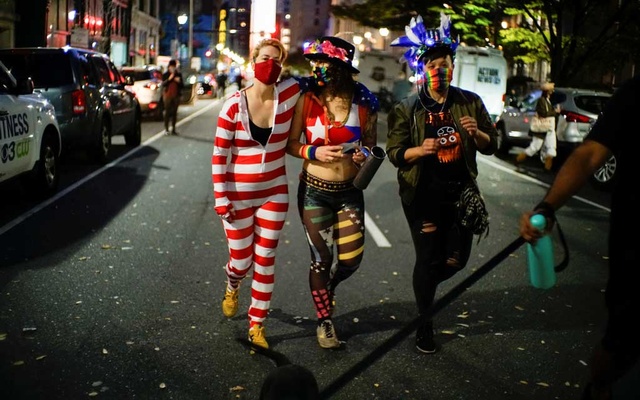 Reuters: Joe Biden supporters danced in Philadelphia's streets on Friday, while armed backers of President Donald Trump in Phoenix shouted, "Stop the steal" as a third day of post-election ballot-counting brought the Democratic former vice president closer to winning the White House.
In Detroit, several hundred supporters of the Republican president, some carrying guns, raised premature chants of "We won!" outside a vote-counting centre for Michigan's largest city, despite news organizations having called the state for Biden.
But Philadelphia took centre stage as the most populous and ballot-rich city in Pennsylvania - a must-win electoral prize for Trump even as Biden surpassed the president on Friday in the state's vote count.
With 20 electoral votes up for grabs, Pennsylvania was the most consequential of a handful of states where the outcome of Tuesday's election was still too close to call, and many Philadelphians delighted in parading past news cameras playing violins and trombones or dressed in election-themed costumes.
Sean Truppo, 37, a social studies teacher, said he lit fireworks upon awaking to the news that Biden had overtaken Trump in the state's count before putting his 4-year-old daughter in a stroller to join the crowds outside the Philadelphia Convention Center.
"My daughter was born under Trump and I wanted her to witness the end of Trump," he said.
Biden had amassed a lead of 253 to 214 in the state-by-state Electoral College vote that actually determines the victor, according to Edison Research. Winning in Pennsylvania would give Biden more than the 270 electoral votes needed for him to become the next president. He has already won the popular vote by some 4 million ballots.
Weary from one of the most bruising presidential races in modern times, millions of Americans have spent three days since polls closed on Tuesday glued to round-the-clock news coverage of the slowing mounting vote tallies, a process prolonged by a record torrent of mail-in ballots.
Many sought distraction from the strain of prolonged uncertainty through work, chores or exercise.
Biden supporter Julie DeLaurier of Brooklyn celebrates in Times Square as election results are counted in Manhattan, New York City, Nov 6, 2020. REUTERS
Biden supporter Julie DeLaurier of Brooklyn celebrates in Times Square as election results are counted in Manhattan, New York City, Nov 6, 2020. REUTERS
Some Trump supporters, taking a cue from the president, insisted something must be wrong with any count showing Biden winning, and brought rifles and handguns with them to rallies outside tabulation centres in Detroit and Phoenix. Wearing "Make America Great Again" red baseball caps and other pro-Trump garb, some fell to their knees in public prayer.
"It's hard to believe that we all went to bed Tuesday night and Trump was so far ahead and now he's behind," George Vosca, 72, a retired Illinois government employee, said after driving an hour to join a pro-Trump rally outside the Wisconsin state capitol building in Madison.
His wife, Marcia Vosca, also voted for Trump even as she acknowledged his flaws. "The thing is, he's really a jerk," Vosca, 64, said of Trump, her husband nodding emphatically in agreement. "But we can all relate to being a jerk."

RAISED FISTS AND JEERS
Pro-Trump rallies organized using the social media hashtag #StopTheSteal were being planned for Saturday in nearly 60 cities across six battleground states, including Michigan and Wisconsin, which were already called for Biden.
Â Most demonstrations on Friday were peaceful and relatively small, though tensions sometimes flared.