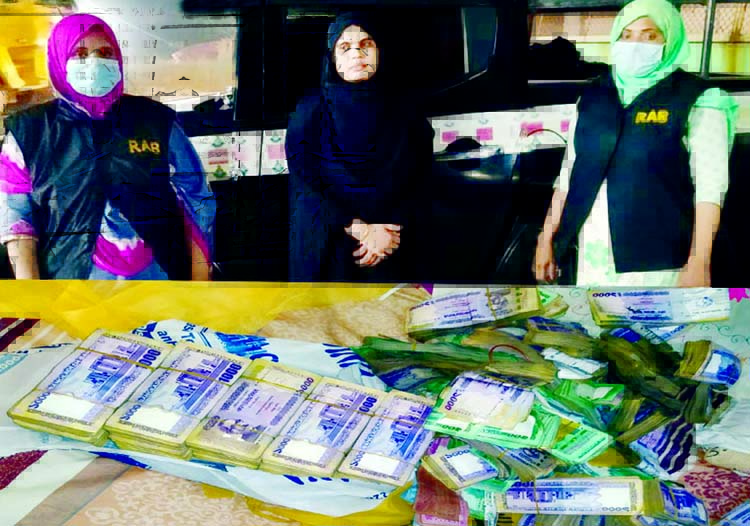 Members of Rapid Action Battalion arrest a Rohingya woman and her husband for their alleged involvement in drug trading and recovered cash Tk 1 cr 17 lakh along with 5300 pieces of Yaba raiding their house at Chandgaon residential area in Chattogram.

The Rapid Action Battalion has arrested a Rohingya couple and seized Tk 11.7 million and more than 5,000 yaba pills from their possession during a raid on a house in Chattagram.
The couple, Shawkat Islam, 32, and Morjina Begum, 28, who came from Myanmar, were arrested duringÂ  the raid in the port city's Chandgaon residential area on Sunday, said RAB-7 Captain Ali Ashraf Tushar.
"A RAB team raided the house based on a tip-off that the couple were involved in the drug trade," Tushar told bdnews24.com. "As soon as the RAB team asked the couple to open the door of the house, they tried to throw the money out of the window. RAB officials saw the matter and seized the money."
Meanwhile, the couple tried to hide yaba pills in their bodies. A total of 5,300 yaba pills were seized from their possession, Tushar added. "They had long been involved in yaba trading. They collect yaba pills from a trafficking ring in Myanmar and sell the methamphetamine drug in Bangladesh. The money seized in the raid came from the yaba trade."
Charges of drugs and illegal trespass were brought against them.