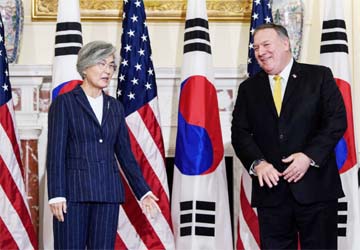 Reuters, SeoulÂ  :
South Korea's foreign minister said on Tuesday she had raised the need for U.S. President-elect Joe Biden's administration to pay "summit-level" attention to reopen denuclearisation talks with North Korea during meetings in the United States this week.
Kang Kyung-wha met a number of Biden allies in Washington, including Democratic Senators Chris Coons and Chris Murphy and John Allen, chief of the Brookings Institution think tank, after arriving there for talks with Secretary of State Mike Pompeo.
Kang said she conveyed the South Korean government's commitment to advance the alliance and work together on North Korea issues, while hearing about Biden's views on foreign policy issues during the meetings.
"I highlighted the need to reinforce diplomatic efforts to achieve the goal of completely denuclearising the Korean peninsula given the urgency of the North Korean nuclear issue," she told reporters.
"I put a particular emphasis on the importance of a swift restart of U.S.-North Korea dialogue ... as an issue that requires a priority, summit-level interests."
The office of South Korean President Moon Jae-in said separately on Wednesday it was arranging a phone call between Moon and Biden for Thursday.
Kang said she was looking forward to having early formal discussions after Biden is sworn in, building on past experiences working with Democratic administrations.
Kang also met incumbent White House National Security Advisor Robert O'Brien. They discussed bilateral, regional and global issues including the election for chief of the World Trade Organisation and agreed to maintain close cooperation until the new administration comes in, she said.