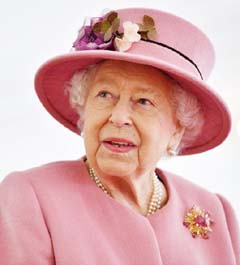 Reuters, London :
Britain will hold "a blockbuster weekend of celebrations" in the summer of 2022, featuring an extra day's public holiday, to mark Queen Elizabeth's 70th anniversary on the throne, the government announced on Thursday.
The 94-year-old, the longest-reigning monarch in British history, will add another milestone when she marks her Platinum Jubilee in February 2022.
The government unveiled plans for four days of celebrations later that year to "reflect on Her Majesty's reign, and her impact on the UK and the world since 1952".
"Her Majesty's Platinum Jubilee will be a truly historic moment - and one that deserves a celebration to remember," culture minister Oliver Dowden said.