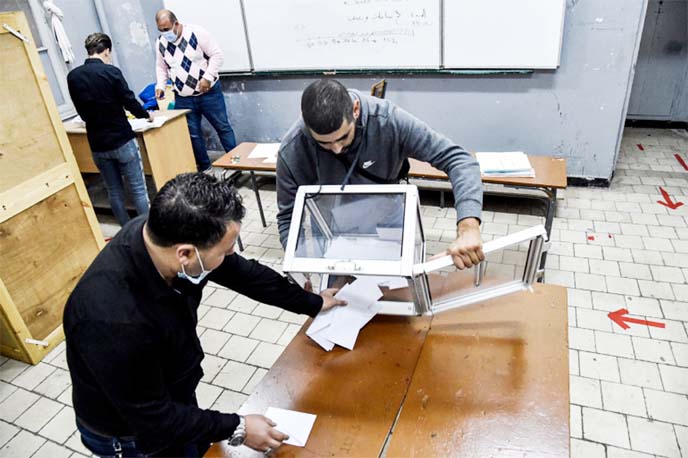 Poll station workers empty a ballot box to begin counting after a vote on a revised constitution ended at a station in Algiers.

Al Jazeera News :
Algerians have approved constitutional reforms in a referendum, though with a record low turnout, the country's constitutional council has announced.
The referendum held on November 1 was widely seen as the government's manoeuvre to neutralise the Hirak protest movement, which had called for a boycott of the plebiscite.
The referendum text was passed with 66.8 percent of votes cast, constitutional council president Kamel Fenniche announced on public television on Thursday, as he welcomed a "transparent" vote "held "under good conditions".
However, the 23.8 percent turnout was a record low for a major vote in Algeria, with fewer than 15 percent of eligible voters endorsing the constitutional document, a key project of President Abdelmadjid Tebboune.
Tebboune, 74, is hospitalised in Germany since October 28 after contracting the coronavirus. His health is improving, according to the last presidential statement issued on Sunday.
Tebboune himself took office last December after an election with a turnout of just under 40 percent, the lowest in a presidential vote since Algerian independence from France in 1962.
That followed months of Hirak protests calling for a full overhaul of Algeria's ruling system.
A statement from Tebboune's office said the referendum's results, initially announced by the election commission last week, indicate the "real and integral" will of the people and met the expectations of the government.
The regime "wanted to break the momentum of the Hirak by reducing its demands to a minimal revision of the constitution," Algeria expert Hasni Abidi told AFP news agency.
The president's enforced absence has plunged one of the largest countries in Africa into a period of uncertainty, as the COVID-19 pandemic spreads, adding to the growing threats of financial and socioeconomic crises.
The reform of the constitution has been trumpeted as the cornerstone of a "new Algeria".
Observers point out that the constitutional changes keep key powers and appointments in the hands of the president.
Massensen Cherbi, a constitutional researcher at the Sciences Po university in Paris, said the changes will lead to "the most authoritarian constitution in the entire Mediterranean".