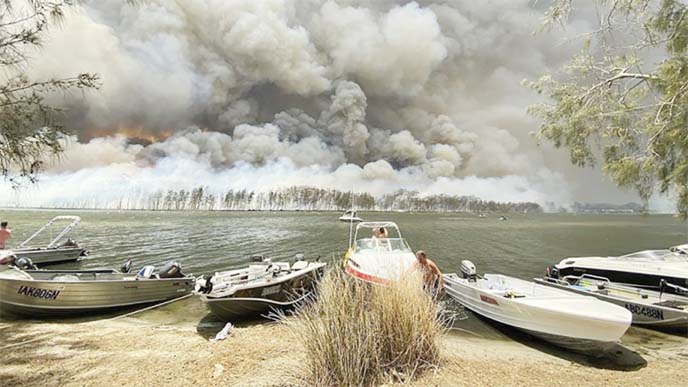 The fires that ravaged southeastern Australia during the last southern hemisphere summer destroyed homes and communities and left dozens dead.

Al Jazeera News :
Australia's climate is expected become hotter and drier, increasing the risk of drought and extreme weather events such as the bushfires that devastated swathes of southeastern Australia in the last southern hemisphere summer, according to the latest climate report from the country's weather bureau.
The Bureau of Meteorology (BoM)'s latest State of the Climate report blames carbon emissions for the increase in extreme heat, noting that a hotter Australia will affect the lives and livelihoods of everyone who lives there.
"Australia needs to plan for and adapt to the changing nature of climate risk now and in the decades ahead," the BoM said in the report, which is was produced jointly with CSIRO, Australia's national science agency and is released every two years. "Reducing global greenhouse gas emissions will lead to less warming and fewer impacts in the future."
Australia's climate has warmed on average by 1.44 degrees Celsius since national records began in 1910, the report said. The country experienced its warmest year on record in 2019, and the seven years from 2013 to 2019 all ranked among the nine warmest years ever, the BoM said.
Australia as a whole is also reporting more "extremely warm" days with 43 reported in 2019, more than triple the number in any of the years prior to 2000.
"This long-term warming trend means that most years are now warmer than almost any observed during the 20th century," the report said. "When relatively cooler years do occur, it is because natural drivers that typically cool Australia's climate, such as La NiÃ±a, act to partially offset the background warming trend."
While the lockdowns associated with the coronavirus pandemic have helped reduce global emissions, the Australian scientists said the effects on climate change would be "negligible" because the rate of carbon dioxide accumulation in the atmosphere had increased with every passing decade since atmospheric measurements began.
"Atmospheric CO2 continues to rise, and fossil fuel emissions will remain the principal driver of this growth throughout 2020 and likely beyond," they said.
The weather agencies' report comes as pressure grows on the government of Prime Minister Scott Morrison to accelerate plans to reduce carbon emissions, and the country heads into another summer wary of a repeat of last year's fires when at least 33 people died, whole communities were destroyed and billions of native animals incinerated.
Morrison has said Australia aims to reach net-zero carbon emissions after 2050, refusing to match other developed countries that have agreed to accelerate the process and achieve the target by 2050.
And Australia is far short even of meeting its Paris Agreement target of cutting carbon emissions by at least 26 percent by 2030, compared with 2005 levels.
The report also found that there had been a decline of around 12 per cent in April to October rainfall since the late 1990s in southeastern Australia, a trend expected to continue - increasing the risk of drought and a longer bushfire season.
Fire seasons in Australia have been getting longer since the 1950s and last year's catastrophic fires began in September and continued for five months.
The seas around Australia are also heating, the report said, as it warned of more frequent and severe bleaching events in coral reefs around the country, including the World Heritage-listed Great Barrier and Ningaloo reefs.
Oceans have warmed by around 1 degree Celsius since 1910 and acidified, fuelling marine heatwaves, the report said.
"The increasing frequency of marine heatwaves around Australia in recent years has caused permanent impacts on marine ecosystem health, marine habitats and species," it said noting the decline in kelp forests and seagrasses, the migration of some marine species, and increased disease.
A study released last month found half the coral that forms the Great Barrier Reef had already died as a result of global heating, and that climate change was 'irreversibly destroying' one of the world's natural wonders.