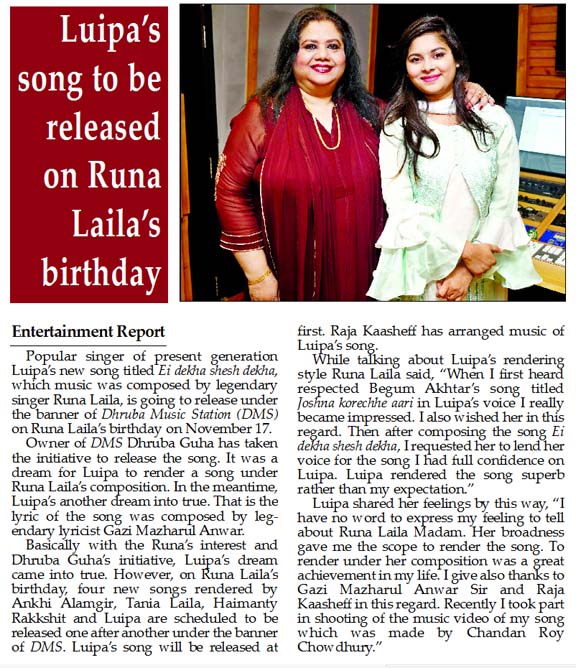 Entertainment Report :
Popular singer of present generation Luipaâs new song titled Ei dekha shesh dekha, which music was composed by legendary singer Runa Laila, is going to release under the banner of Dhruba Music Station (DMS) on Runa Lailaâs birthday on November 17.
Owner of DMS Dhruba Guha has taken the initiative to release the song. It was a dream for Luipa to render a song under Runa Lailaâs composition. In the meantime, Luipaâs another dream into true. That is the lyric of the song was composed by legendary lyricist Gazi Mazharul Anwar.
Basically with the Runaâs interest and Dhruba Guhaâs initiative, Luipaâs dream came into true. However, on Runa Lailaâs birthday, four new songs rendered by Ankhi Alamgir, Tania Laila, Haimanty Rakkshit and Luipa are scheduled to be released one after another under the banner of DMS. Luipaâs song will be released at first. Raja Kaasheff has arranged music of Luipaâs song.
While talking about Luipaâs rendering style Runa Laila said, âWhen I first heard respected Begum Akhtarâs song titled Joshna korechhe aari in Luipaâs voice I really became impressed. I also wished her in this regard. Then after composing the song Ei dekha shesh dekha, I requested her to lend her voice for the song I had full confidence on Luipa. Luipa rendered the song superb rather than my expectation.â
Luipa shared her feelings by this way, âI have no word to express my feeling to tell about Runa Laila Madam. Her broadness gave me the scope to render the song. To render under her composition was a great achievement in my life. I give also thanks to Gazi Mazharul Anwar Sir and Raja Kaasheff in this regard. Recently I took part in shooting of the music video of my song which was made by Chandan Roy Chowdhury.â