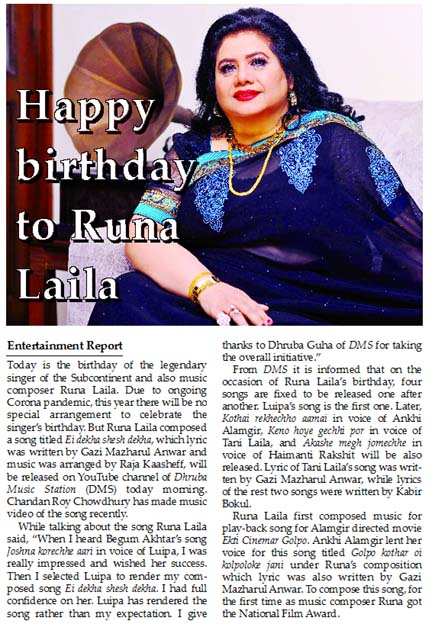 Entertainment Report :
Today is the birthday of the legendary singer of the Subcontinent and also music composer Runa Laila. Due to ongoing Corona pandemic, this year there will be no special arrangement to celebrate the singerâs birthday. But Runa Laila composed a song titled Ei dekha shesh dekha, which lyric was written by Gazi Mazharul Anwar and music was arranged by Raja Kaasheff, will be released on YouTube channel of Dhruba Music Station (DMS) today morning. Chandan Roy Chowdhury has made music video of the song recently.
While talking about the song Runa Laila said, âWhen I heard Begum Akhtarâs song Joshna korechhe aari in voice of Luipa, I was really impressed and wished her success. Then I selected Luipa to render my composed song Ei dekha shesh dekha. I had full confidence on her. Luipa has rendered the song rather than my expectation. I give thanks to Dhruba Guha of DMS for taking the overall initiative.â
From DMS it is informed that on the occasion of Runa Lailaâs birthday, four songs are fixed to be released one after another. Luipaâs song is the first one. Later, Kothai rekhechho aamai in voice of Ankhi Alamgir, Keno hoye gechhi por in voice of Tani Laila, and Akashe megh jomechhe in voice of Haimanti Rakshit will be also released. Lyric of Tani Lailaâs song was written by Gazi Mazharul Anwar, while lyrics of the rest two songs were written by Kabir Bokul.
Runa Laila first composed music for play-back song for Alamgir directed movie Ekti Cinemar Golpo. Ankhi Alamgir lent her voice for this song titled Golpo kothar oi kolpoloke jani under Runaâs composition which lyric was also written by Gazi Mazharul Anwar. To compose this song, for the first time as music composer Runa got the National Film Award.Â Â Â Â