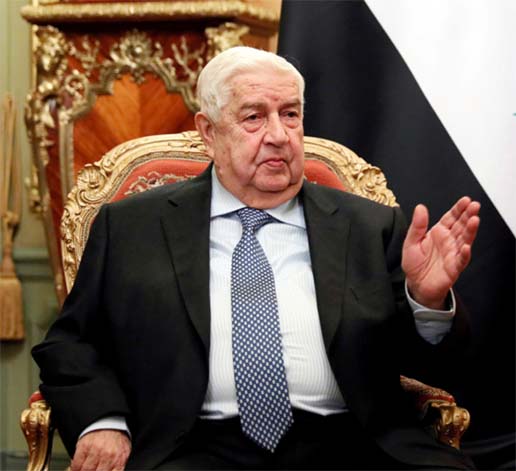 Al Jazeera News :
Syria's top diplomat and longtime Foreign Minister Walid al-Moallem, a staunch defender of Syrian President Bashar al-Assad's bloody crackdown on peaceful protesters that sparked a 10-year conflict, has died, state TV reported on Monday.
There were no details on the cause of death, but the 79-year old had for years been in poor health with heart problems.
A source close to the Syrian government said it was widely expected his deputy, veteran diplomat Faisal Mekdad, would replace his as foreign minister.
"He was known for his honourable patriotic positions," the government said in a statement, adding that al-Moallem died at dawn and would be buried later on Monday in Damascus.
Al-Moallem was first appointed foreign minister in 2006 and also held the post of deputy prime minister.
The veteran diplomat saw his country's tilt further towards Iran and Russia, who have helped shore up al-Assad's rule and allowed the authoritarian leader to regain most of the territory he once lost to fighters.
Syria erupted into civil war nearly 10 years ago after al-Assad in 2011 began a brutal crackdown on protesters calling for an end to his family's rule.
Al-Moallem accused Washington and the West of increasing the country's unrest and labelled anti-government fighters as "terrorists" in a conflict that has cost tens of hundreds of thousands of deaths and led to the exodus of millions of refugees.