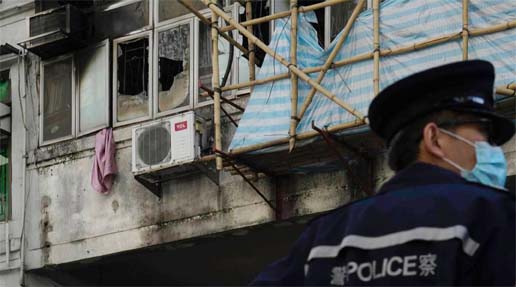 A police officer stands guard at a fire site in Hong Kong on Monday.

AP, Hong Kong :
Authorities in Hong Kong said at least seven people were killed and 11 inured in a fire at an apartment building that may have started at a Hindu religious gathering.
The blaze broke out Sunday night in Yau Ma Tei, a usually bustling area in Kowloon packed with old apartment blocks, shops and businesses.
The fire started in what appeared to be a restaurant that was located in an apartment in a residential building, fire officials said at a news conference early Monday. Officials said the cause of the fire was still unknown.
The building lacked a sprinkler system and people were trapped in the back of the kitchen, according to fire services department officer Cheung Kwong-yuen.
Local media reports said that people in the restaurant were celebrating Diwali, a Hindu festival, as well as a birthday when the blaze occurred. Lit candles had set soundproofing materials on fire, according to the media reports.
The apartment, on the first floor of a low-rise building, had some of its windows blown out during the fire and the exterior walls were charred with soot. The building was cordoned off Monday while policemen stood guard.
Residents in the neighborhood said that many Nepalese live in the area, and that the people caught in the fire were from the South Asian nation, many of whose citizens work in Hong Kong's finance, retail and security businesses.
Hong Kong leader Carrie Lam issued a statement shortly after midnight saying that she was "deeply saddened that the fire in Yau Ma Tei last night caused a number of deaths and injuries." She also visited the site of the fire Monday morning. The incident highlights fire safety issues in older buildings in Hong Kong, some of which are not adequately outfitted with appropriate fire safety management systems.