Keya Payel wants to act in everybody watches movie 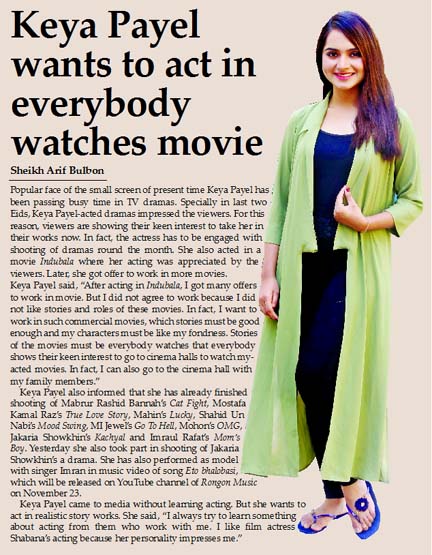 Sheikh Arif Bulbon :
Popular face of the small screen of present time Keya Payel has been passing busy time in TV dramas. Specially in last two Eids, Keya Payel-acted dramas impressed the viewers. For this reason, viewers are showing their keen interest to take her in their works now. In fact, the actress has to be engaged with shooting of dramas round the month. She also acted in a movie Indubala where her acting was appreciated by the viewers. Later, she got offer to work in more movies.
Keya Payel said, âAfter acting in Indubala, I got many offers to work in movie. But I did not agree to work because I did not like stories and roles of these movies. In fact, I want to work in such commercial movies, which stories must be good enough and my characters must be like my fondness. Stories of the movies must be everybody watches that everybody shows their keen interest to go to cinema halls to watch my-acted movies. In fact, I can also go to the cinema hall with my family members.â
Keya Payel also informed that she has already finished shooting of Mabrur Rashid Bannahâs Cat Fight, Mostafa Kamal Razâs True Love Story, Mahinâs Lucky, Shahid Un Nabiâs Mood Swing, MI Jewelâs Go To Hell, Mohonâs OMG, Jakaria Showkhinâs Kachyal and Imraul Rafatâs Momâs Boy. Yesterday she also took part in shooting of Jakaria Showkhinâs a drama. She has also performed as model with singer Imran in music video of song Eto bhalobasi, which will be released on YouTube channel of Rongon Music on November 23.
Keya Payel came to media without learning acting. But she wants to act in realistic story works. She said, âI always try to learn something about acting from them who work with me. I like film actress Shabanaâs acting because her personality impresses me.âÂ