A dark comedy that revolves 3 murders 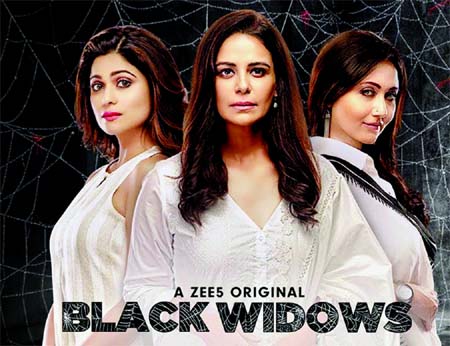 ZEE5 offers an early Christmas treat with Black Widows premiere on 18th December 2020, an Original Quirky Drama.
ZEE5, Indiaâs largest video streaming platform recently announced the power-packed female and male lead cast for its 8th International adaptation of popular Finnish show Black Widows. Now, the platform exclusively released the trailer of the web-series giving the audience a glimpse into the devious world of three Black Widows #WomenOnTop.Â  The series has an ensemble cast of Mona Singh, Shamita Shetty, Swastika Mukherjee and Raima Sen along with Sharad Kelkar, Parambrata Chattopadhyay, Sabyasachi Chakraborty, Aamir Ali to Faisal Malik, Nikhil Bhambri and Shaheb.
Directed by Birsa Dasgupta and produced by Big Synergy Media Ltd, the show is a quirky drama, set in a small picturesque town in India. It revolves around how three best friends who thought they got away with the perfect crime of killing their abusive and cruel husbands. However, one of them (husband) survives and seeks revenge on the deadly female trio. Instead of freedom, what they get is a soon-to-be retiring cop on their trail.