US troops in Afghanistan 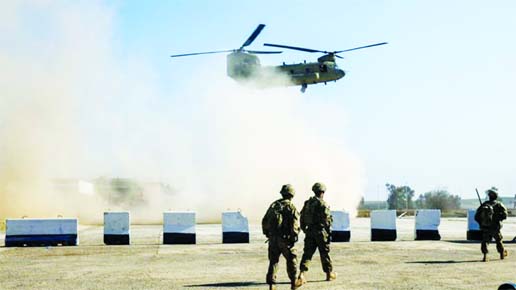 US troops have been involved in the fight against the Islamic State jihadist group in Iraq.

BBC Online :
Senior Republicans and US allies have voiced alarm at the announcement that a large number of American troops will be removed from Afghanistan and Iraq.
The US is to withdraw 2,500 troops from both countries by mid-January, the US Department of Defense confirmed.
President Donald Trump has long called for troops to come home and has criticised US interventions abroad.
The head of Nato warned of a "very high price". Senate Majority Leader Mitch McConnell called the plan "a mistake".
Mr McConnell - usually a staunch defender of Mr Trump - also warned the president against making "any earth-shaking changes in regards to defence and foreign policy" before leaving the White House.
Mr Trump is yet to concede to Democrat Joe Biden, and the cuts are scheduled to take place five days before Mr Biden takes office on 20 January 2021.
The president-elect has said he is "rightly weary of our longest war" in Afghanistan but also said there was a need to "end the war responsibly, in a manner that ensures we both guard against threats to our homeland and never have to go back".
The Biden transition team has not yet commented on the announcement.
In Iraq, the number of US troops will be cut by 500 to 2,500, while the number of service personnel in Afghanistan will fall from 4,500 to about 2,500.
Acting US Defense Secretary Chris Miller - who was installed last week after Mr Trump abruptly fired Mark Esper - said the move reflected the president's policy "to bring the wars in Afghanistan and Iraq to a successful and responsible conclusion and to bring our brave service members home".
"We will protect our children from the heavy burden and toll of perpetual war, and we will honour the sacrifices made in the services of peace and stability in Afghanistan, Iraq and around the world," he said.
He did not confirm if the drawdown plan had been endorsed by Gen Mark Milley, chairman of the Joint Chiefs of Staff, but said the decision followed "continuous engagement with the president's national security cabinet".
Until Mr Esper's removal, the Pentagon had said the Taliban had not met pledges to reduce violence, which has soared since the militants began peace talks with the Afghan government in September.