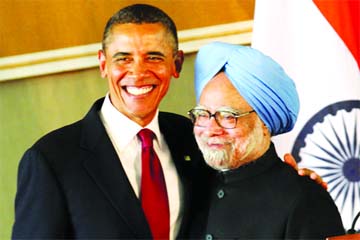 Al Jazeera News :
Former US President Barack Obama's descriptions of India's leaders in his new memoir, A Promised Land, has caused ripples in political circles, with former Indian Prime Minister Manmohan Singh receiving praise.
The book, released on Tuesday, covers his campaign for the White House and his first term in office, during which he visited India when the now-opposition Congress party was in power.
It contains his impressions of then-Prime Minister Singh, party President Sonia Gandhi and her son, Rahul Gandhi.
Obama describes Singh "as a chief architect of India's economic transformation" and "a self-effacing technocrat who'd won people's trust not by appealing to their passions but by bringing about higher living standards and maintaining a well-earned reputation for not being corrupt."
Obama's praise for Singh was welcomed by senior Congress leaders like Shashi Tharoor.
But it is Obama's frank and less-than-flattering description of Rahul Gandhi, the 50-year-old heir of the Nehru-Gandhi dynasty, that drew criticism from Congress party leaders.