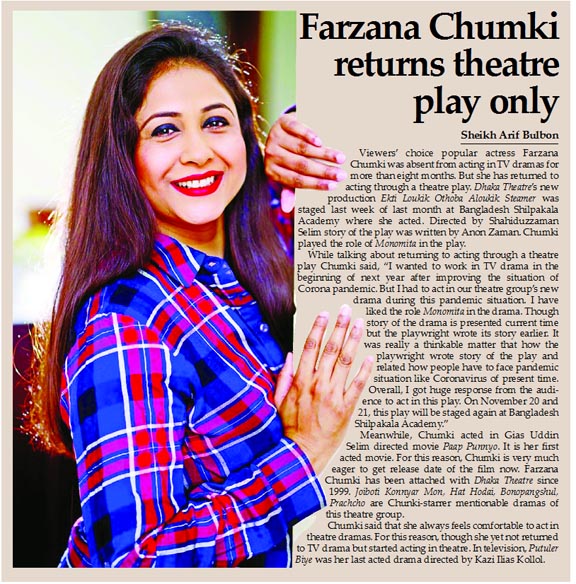 Sheikh Arif Bulbon :
Viewersâ choice popular actress Farzana Chumki was absent from acting in TV dramas for more than eight months. But she has returned to acting through a theatre play. Dhaka Theatreâs new production Ekti Loukik Othoba Aloukik Steamer was staged last week of last month at Bangladesh Shilpakala Academy where she acted. Directed by Shahiduzzaman Selim story of the play was written by Anon Zaman. Chumki played the role of Monomita in the play.
While talking about returning to acting through a theatre play Chumki said, âI wanted to work in TV drama in the beginning of next year after improving the situation of Corona pandemic. But I had to act in our theatre groupâs new drama during this pandemic situation. I have liked the role Monomita in the drama. Though story of the drama is presented current time but the playwright wrote its story earlier. It was really a thinkable matter that how the playwright wrote story of the play and related how people have to face pandemic situation like Coronavirus of present time. Overall, I got huge response from the audience to act in this play. On November 20 and 21, this play will be staged again at Bangladesh Shilpakala Academy.â
Meanwhile, Chumki acted in Gias Uddin Selim directed movie Paap Punnyo. It is her first acted movie. For this reason, Chumki is very much eager to get release date of the film now. Farzana Chumki has been attached with Dhaka Theatre since 1999. Joiboti Konnyar Mon, Hat Hodai, Bonopangshul, Prachcho are Chunki-starrer mentionable dramas of this theatre group.
Chumki said that she always feels comfortable to act in theatre dramas. For this reason, though she yet not returned to TV drama but started acting in theatre. In television, Putuler Biye was her last acted drama directed by Kazi Ilias Kollol.