Subarna wants to be versatile singer 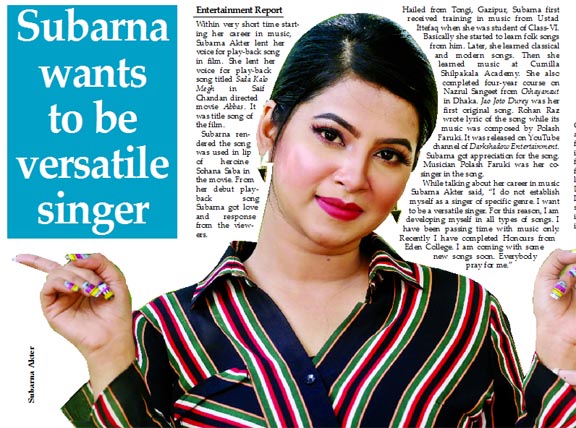 Entertainment Report :
Within very short time starting her career in music, Subarna Akter lent her voice for play-back song in film. She lent her voice for play-back song titled Sada Kalo Megh in Saif Chandan directed movie Abbas. It was title song of the film.
Â Subarna rendered the song was used in lip of heroine Sohana Saba in the movie. From her debut play-back song Subarna got love and response from the viewers.
Hailed from Tongi, Gazipur, Subarna first received training in music from Ustad Ittefaq when she was student of Class-VI. Basically she started to learn folk songs from him. Later, she learned classical and modern songs. Then she learned music at Cumilla Shilpakala Academy. She also completed four-year course on Nazrul Sangeet from Chhayanaut in Dhaka. Jao Joto Durey was her first original song. Rohan Raz wrote lyric of the song while its music was composed by Polash Faruki. It was released on YouTube channel of Darkshadow Entertainment. Subarna got appreciation for the song. Musician Polash Faruki was her co-singer in the song.
While talking about her career in music Subarna Akter said, âI do not establish myself as a singer of specific genre. I want to be a versatile singer. For this reason, I am developing myself in all types of songs. I have been passing time with music only. Recently I have completed Honours from Eden College. I am coming with some new songs soon. Everybody pray for me.âÂ Â Â  Â