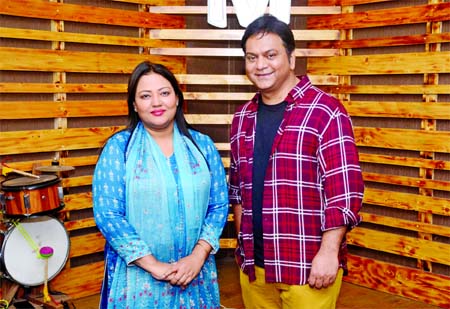 Entertainment Report :
This year popular folk singer and Member of the Parliament Momtaz Begum did not render any new song. At the end of current year, she lent her voice for the title song of Mir Sabbir directed his first movie Raat Jaga Phul. It is a government-grant movie.
Recording of the title song was done at a studio in the capitalâs Niketan area recently. Mir Sabbir wrote lyric of the song, while guitarist-music composer Emon Chowdhury composed its music.
While talking about the song Momtaz said, âIn a word, I can say I have rendered an outstanding song after long time. Mir Sabbir can write lyrics well. Earlier, I saw his acting. I believe this time viewers will be impressed about his written lyrics. I have full confidence of work of Emon. For this reason, I rendered the song with full confidence. I hope the movie will be enjoyed by the viewers.â
Mir Sabbir shared his feelings by this way, âI am really lucky because noted singer Momtaz lent her voice for the title song of my first directed film which is a government-grant movie. I am really grateful to her in this regard. Emon has composed its tune nicely.â
Sabbir also informed that he wants to release the movie on December 25. Sabbir not only acted in the central role in the film but also wrote story, script, dialogue, lyrics of play-back song and also gave direction of it.Â Â Â Â