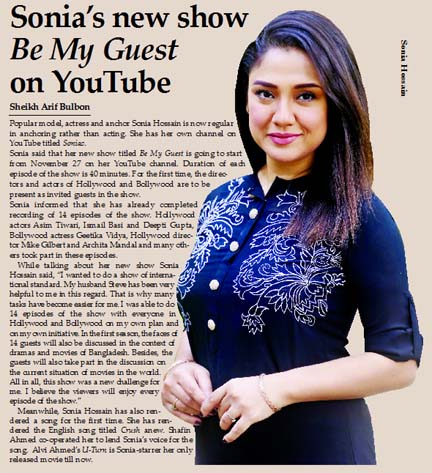 Sheikh Arif Bulbon :
Popular model, actress and anchor Sonia Hossain is now regular in anchoring rather than acting. She has her own channel on YouTube titled Soniac.
Sonia said that her new show titled Be My Guest is going to start from November 27 on her YouTube channel. Duration of each episode of the show is 40 minutes. For the first time, the directors and actors of Hollywood and Bollywood are to be present as invited guests in the show.
Sonia informed that she has already completed recording of 14 episodes of the show. Hollywood actors Asim Tiwari, Ismail Basi and Deepti Gupta, Bollywood actress Geetika Vidya, Hollywood director Mike Gilbert and Archita Mandal and many others took part in these episodes.
While talking about her new show Sonia Hossain said, âI wanted to do a show of international standard. My husband Steve has been very helpful to me in this regard. That is why many tasks have become easier for me. I was able to do 14 episodes of the show with everyone in Hollywood and Bollywood on my own plan and on my own initiative. In the first season, the faces of 14 guests will also be discussed in the context of dramas and movies of Bangladesh. Besides, the guests will also take part in the discussion on the current situation of movies in the world. All in all, this show was a new challenge for me. I believe the viewers will enjoy every episode of the show.â
Meanwhile, Sonia Hossain has also rendered a song for the first time. She has rendered the English song titled Crush anew. Shafin Ahmed co-operated her to lend Soniaâs voice for the song.Â  Alvi Ahmedâs U-Turn is Sonia-starrer her only released movie till now.