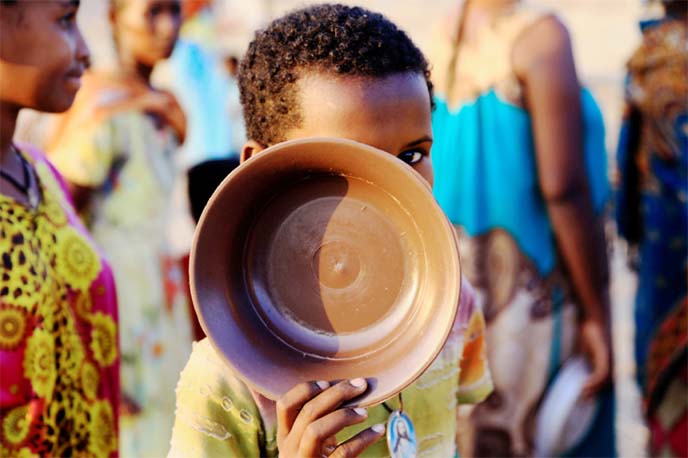 An Ethiopian child who fled war in Tigray queues for food at the Um-Rakoba camp, on the Sudan-Ethiopia border.

Al Jazeera News :
The United Nations's agencies are planning for the possible arrival of 200,000 refugees in Sudan fleeing violence in Ethiopia over a six-month period, a UN refugee agency official said.
"Together with all the agencies, we have built a response plan for about 20,000 people and currently we are at about 31,000 so it has already surpassed that figure," Axel Bisschop told a Geneva briefing on Friday.
"The new planning figure is around 200,000."
Hundreds, possibly thousands, of people have died since Ethiopian government troops launched a war two weeks ago in northern Tigray state against regional authorities they accused of staging a surprise attack on federal forces.
Ethiopia's Prime Minister Abiy Ahmed, last year's Nobel Peace Prize winner, unleashed a military campaign in the Tigray region on November 4 with the declared aim of unseating its governing party, the Tigray People's Liberation Front (TPLF), which he accuses of defying his government and seeking to destabilise it.
Thousands of refugees have fled Africa's second-most populous country, some crowding into boats to cross a river to Sudan, overwhelming aid groups positioned on the other side.
UNICEF's Sudan-based representative Abdullah Fadil said there were concerns about diseases spreading amongst the crowds, of whom nearly half are children.
The UN agencies are seeking $50m in immediate funding which will go towards providing food and setting up new camps.
Meanwhile, Tigray forces fired rockets at a neighbouring state on Friday, heightening fears the internal conflict could spread to other parts of the country.
The attack came a day after Ethiopia said its forces were closing in on Tigray's capital, Mekelle.
International calls for peace have escalated along with the fighting.
Officials from the United States on Thursday said they had urged de-escalation from both Abiy and the TPLF leadership, but saw little prospect for negotiations.
"At this point, neither party, from everything we hear, is interested in mediation," said Tibor Nagy, the top US diplomat for Africa.