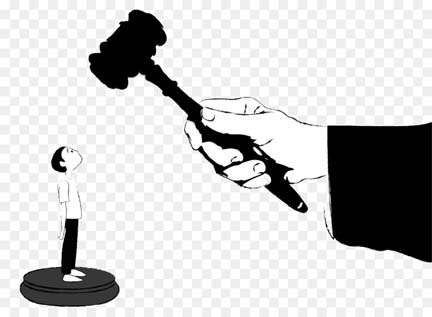 Majhar Mannan :
There has been an alarming rise in cases of juvenile delinquency in Bangladesh. Crime by adolescent is simultaneously on the rise too. The relationship of age with crime is a harsh phenomenon.Â  Article 82 of the Bangladesh Penal Code states that no act of a child under the age of 9 can be considered a crime. According to Majority Act, 1875, anyone under the age of 18 is called a juvenile. By reviewing sections 82-83 of the Penal Code and Children Act it can be said that juvenile offenders will be between the ages of 12 to 16. It is very difficult to determine the exact definition of juvenile delinquency. It is often said that a juvenile convicted by a juvenile court is a juvenile offenders. But the judgements of juvenile courts vary from country to country and society to society. According to Cavan and Ferdinand, juvenile delinquency is the failure of adolescents to display the behaviour desired by the society. In short, juvenile delinquency is the act by which teenagers become dangerous to society and adolescent life.
The number of juvenile delinquency cases is increasing day by day and the type of crime is changing. About five hundred juvenile delinquency cases are filed every year. A recent survey shows that the number of juvenile gangs is over sixty and this number is growing at an alarming rate.Â  Criminologists emphasize the importance of adolescents' behaviour and activities. Social customs, religion, values, social discipline, the idea of good and evil are created among the children and adolescents through the process of socialization. Children and adolescents are taught to behave according to the rules of society and are developed as good citizens. Juvenile delinquency needs to be controlled by society and state-recognized norms and regulations. In order to analyze the causes of juvenile delinquency, we need to take a biological, psychological, economic, sociological, geographical and institutional perspective. Physical disorders, psychological imbalances, poverty, social disorder, adverse climate, lack of proper counseling are responsible for juvenile delinquency. Excessive addiction to mobile and Internet, degradation of social values, lack of playground, the negative impact of social media, lack of family awareness, lack of pure entertainment, mechanical urban life, deterioration of relationship between children and parents play a major role behind juvenile delinquency. Â
Adolescents are more likely to become criminals if they constantly observe conflicts and abnormalities in the family environment. Adolescents are getting involved in a variety of criminal activities. Theft, snatching, drug addiction, rape, eve-teasing, gambling, extortion and even killing are notable among them.Â Â  Many teenagers go astray because of their bad company. Adolescents are failing to choose the right path due to cultural aggression, deprivation, negligence and weak family bonding. Children and teenagers are very fond of imitation. This imitation is a major cause of juvenile delinquency. Adolescents are driven by emotion than wisdom. Different types of inconsistencies, severe negligence, separation from the mainstream of society, underestimation of the rights of adolescents mislead the adolescents.
Juvenile offenders are identified as different from other offenders. That's why there are special laws for their trial. Their trial is conducted in accordance with the children Act, 1974, Criminal Procedure Code 1898, Probation and Offenders Ordinance 1960 and Prison Code. The government has taken a number of steps considering juvenile delinquency. The government has set up a number of correctional institutions according to the Children Act.Â  They are-
a)Â Â  Â National correctional institution, Tongi, Gazipur
b)Â Â  Â National correctional institution, Konabari, Gazipur
c)Â Â  Â Correctional institution Jessore
If the roots of juvenile delinquency are not uprooted, it will take a horrible shape. Some very effective steps need to be taken to control juvenile delinquency. Proper counseling, moral development, family bonding, proper education, religious education, healthy recreation, sports and exercise, education of patriotism and proper socialization can play a vital role to curbÂ  juvenile crime.Â  This crime may reduce if the society can create the right values among the adolescents. We have to develop the mentality of social service among the children from an early age. For the psychological development of children, parents must give time and talk to them nicely. Parents need to pay attention to the small needs of their children. Educational institutions have a major role to create values and ethics among children. It is essential to make moral education compulsory and to provide counseling in every educational institution.Â  We have to make a habit for children to read different types of books from an early age. Juvenile delinquency can never be controlled only by punishment; rather the most important thing is to correct their behaviour.