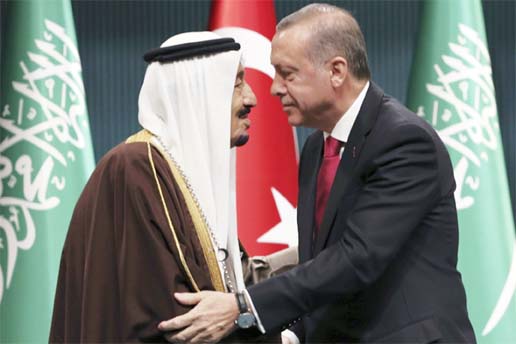 Al Jazeera News :
Turkish President Recep Tayyip Erdogan discussed ways of enhancing ties with King Salman of Saudi Arabia in a rare phone call since the killing of journalist Jamal Khashoggi.
The phone call came on the eve of the G20 leaders' summit hosted by Riyadh on Saturday and Sunday.
Erdogan and the Saudi king discussed bilateral relations and exchanged views on the G20 summit, the Turkish presidency said late on Friday.
The Turkish leader will address the summit via video link at 13:00 GMT.
"President Erdogan and King Salman agreed on keeping channels of dialogue open in order for the bilateral relations to be enhanced and for issues to be settled," the presidency said.
Ankara and Riyadh have been at odds over a number of issues, including policies in the Libyan and Syrian conflicts.
But the tensions between the two regional powers have intensified since the 2018 murder of Washington Post contributor Khashoggi at the kingdom's Istanbul consulate.
The case has sparked an international outcry and tarnished the global reputation of Crown Prince Mohammed bin Salman (MBS).
Khashoggi was strangled and his body cut into pieces by a 15-man Saudi hit squad inside the consulate, according to Turkish officials. His remains have not been found.
Erdogan has said the order to murder Khashoggi came from "the highest levels" of the Saudi government but has never directly blamed MBS.
In September, a Saudi court overturned five death sentences handed down after a closed-door trial in Saudi Arabia that ended last year, sentencing them to 20 years in prison instead.