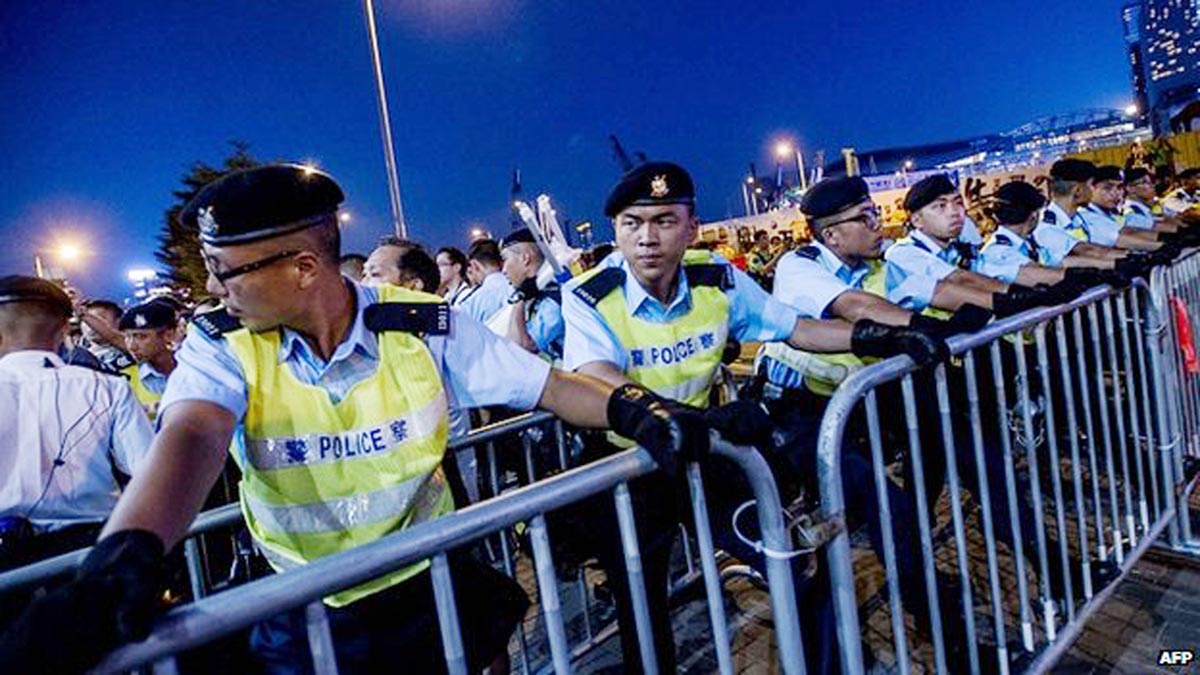 Overnight, police protected a cordon outside the government offices in Hong kong.

Pro-democracy protesters have been clashing with riot police Hong Kong, defying calls by the authorities to halt their "illegal" action.Demonstrators tried to push through a police barricade, reports say. Pepper spray was used to dispel them.The protesters want China to scrap restrictions on the election of the territory's next leader.Hong Kong Chief Executive CY Leung says the elections will go ahead as planned - but promised further consultations.In his first public statement since the protests began, Mr Leung said he and his government had "been listening attentively to members of [the] public".He promised a further round of consultations but said "resolute" action would be taken against what he described as an illegal demonstration.Thousands joined a sit-in outside government headquarters this weekend, bolstering a week-old protest.The initial protest began as a strike by students, calling for democratic reforms.On Saturday night, the leader of Occupy Central, another protest movement, brought forward a planned action to merge it with the sit-in by the students outside the central government building.The movement has called for the Chinese government to scrap rules that would allow it to vet the chief executive elected in 2017. It also wants the resumption of public consultation on democratic reforms.A statement by the movement said Mr Leung had "failed to deliver on political reform".The protesters had also called for further talks but it is not clear how far - if at all - Mr Leung's mention of further consultations will be seen as recognising their demands.Occupy Central had originally planned to paralyse the central business district on Wednesday, but organisers advanced the protest and changed the location in an apparent bid to harness momentum from student protests outside the government complex.Student activists had stormed into a courtyard of the complex late on Friday and scuffled with police using pepper spray.Police said they made more than 60 arrests including prominent student activist leader Joshua Wong.The BBC's Juliana Liu in Hong Kong says that, even before Mr Tai's announcement, thousands had arrived spontaneously to support the demonstration by students.Those outside the government buildings plan to stay until they are forcibly removed, she says.However, some students expressed unease that their protest was apparently being taken over by Occupy Central."A lot of students left as soon as Occupy made the announcement they were starting their occupation," said university graduate Vito Leung, 24. Unrest began when the Chinese government announced that candidates for the 2017 chief executive election would first have to be approved by a nominating committee.Activists have argued that this does not amount to true democracy.