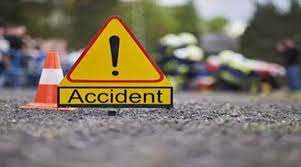 At least seven people have died in a head-on collision between a bus and an autorickshaw in Manikganj's Daulatpur Upazila.
The incident took place in the Upazila's Mulkandi area around 2:45 pm Friday, according to Daulatpur Police OC Rezaul Karim
The casualties include six members of a family, according to the authorities.
They have been identified as Harekrishna Badyakar, 60, Khushi Badyakar, 50, Gobinda Badyakar, 30, Bobita Badyakar, 26, Radhe Badyakar, 5, Ramprasad Badyakar, 30, and the autorickshaw driver Jamal Sheikh, 32, all hailing from Tangail's Nagarpur Upazila.
The victims were headed to Manikganj on the autorickshaw when the bus rammed into the vehicle from the opposite direction. They all died on the spot, according to OC Rezaul.
The bodies have been sent to Daulatpur Upazila Health Complex while police are also preparing to start a case over the incident, he said.Â
Source: bdnews24.comÂ