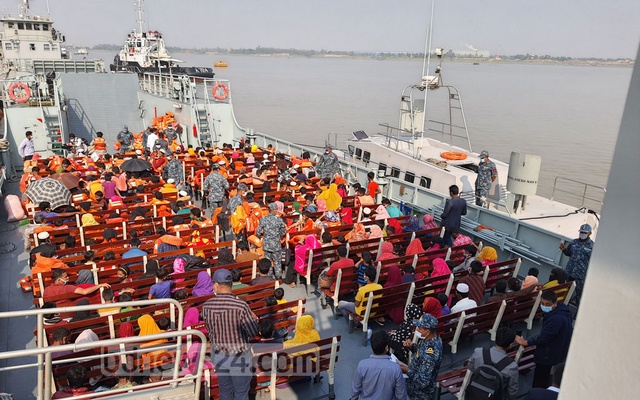 The first batch of Rohingya refugees from the Coxâs Bazar camp has reached the island of Bhasan Char in Noakhali.
Seven ships carrying 1,642 Rohingya people from Ukhiya reached the island at 2 pm Friday.
The ships departed Chattogram jetties around 10:15 am Friday, according to Lt Commander MKZ Shamim of Bangladesh Navy.
The refugees had gathered at the Ghumdhum Transit Camp near Kutupalong camp on Wednesday ahead of the move to Bhasan Char. On Thursday, they were moved to Chattogram in five bus convoys.
Â The buses were escorted by the Rapid Action Battalion and police personnel for security.
The Rohingya refugees spent the night in the BAF Shaheen School and College transit camp upon reaching Chattogram.
They later boarded seven navy and army vessels headed for the Bay of Bengal island on Friday morning, with the authorities making seating arrangements for on the decks of the ships.
Two navy ships have already transported over 1,000 pieces of luggage belonging to the Rohingya to Bhasan Char on Thursday, navy officials said.
Â Another eight ships of the navy and coastguard are accompanying the convoy to Bhasan Char.
Two years ago, the government made plans to relocate a portion of the 1.1 million forcibly-displaced Rohingya people living in and outside the refugee camps along Bangladesh's south coast to Bhasan Char, situated in the Meghna River's estuary near Hatia.
However, the process of relocation failed to get off the ground due to the reluctance of the Rohingya refugees to move to the uninhabited island.
Â The government, at a cost of over Tk 23 billion, has set up the infrastructure for 120 cluster villages across 13,000 acres of the island to accommodate more than 100,000 people.
Bhasan Char currently shelters around 300 Rohingya, who were rescued at sea while on their way to Malaysia.
Later on Sept 5, a delegation of Rohingya refugees from the Cox's Bazar camps was sent on a visit to Bhasan Char.
Â Upon their return, some Rohingya expressed interest in moving to Bhasan Char, according to government officials.
However, the UNHCR and other international organisations have maintained distance from the government's initiative of relocating the Rohingya to Bhasan Char.
In a statement on Wednesday, the United Nations said it has not been involved in preparations for this movement or the identification of the refugees and has limited information on the overall relocation exercise.
Â The UN called on Bangladesh to ensure that the Rohingya people are able to make a 'free and informed decision' about relocating to Bhasan Char.
The Human Rights Watch also urged the government to stop relocating the Rohingya refugees to Bhashan Char.Â
Source: bdnews24.comÂ