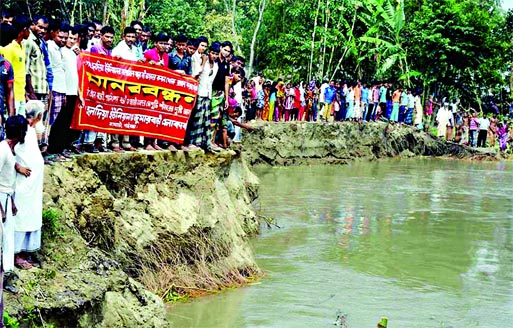 Hundreds of flood affected people of 10 villages under Saghata UZ of Gaibandha formed human chain on the bank of the Jamuna River on Sunday seeking immediate protection from erosion. Banglar Chokh

Staff Reporter :The flood situation remains unchanged in several districts, while it has been improved slightly in some other districts of the country. However, it worsened in Sylhet, Sunamganj and Gaibandha till Sunday due to incessant rains and on rush of hilly water from the upstream. Meanwhile, the flood-hit people are passing their days with miseries, as dwelling houses of many people were damaged and road communications collapsed in several areas. In this backdrop, the flood victims are crying for relief materials. They are facing acute crisis of dry food and pure drinking water and medicines. But the allocation of the government is insufficient.Â Â  On the other hand, it was apprehended that the outbreak of different waterborne diseases might be seen in the flood-affected areas following the improvement of the flood.According to Flood Forecasting and Warning Centre (FFWC), the river water was flowing above the danger level at 8 stations in the country on Sunday. The Karotoa River was flowing 17 cm above danger level at Chakrahimpur point, while the Gur River was 71 cmÂ  at Singra point, the Shitalakhya River's flowing was 5 cm at Lakhpur point, Little Jamuna flowing above 12 cm in Naogaon, the Surma's flow was 5 cm at Kanaighat point and 25 cm in Sunamganj, the Old Surma's flow was 14 cm at Dherai point and the Kangsha River was flowing 133 cm above the danger level at Jariajanjail point. Ripon Karmaker, Assistant Engineer Duty Officer of the FFWC, said that the Jamuna, the Ganges and the Padma rivers were in falling below trend on Sunday, while the Brahmaputra and the Meghna rivers were in rising trend. He also said that the Brahmaputra, the Jamuna, the Ganges and the Padma rivers may likely to fall today (Monday) while the Meghna and the rivers around the Dhaka city- Buriganga, Shitalakhya, Turag and Balukhal-- may likely to rise. According to him, the flood situation may likely to improve in Sunamganj, Naogaon and Netrakona districts. However, the flood situation has been improved in Kurigram, Jamalpur and Bogra districts. Â In Sylhet, vast areas of Kanaighat upazila went under floodwater on Sunday. Several thousands people of Suroighat, Kalinagar, Barband and some areas of the upazila were marooned due to the flood. The farmers are worried about extensive damage to the transplanted Aman paddy and other seasonal crops if the flood continues for several days. In Sunamganj, the low-lying areas of several upazilas of the district have been flooded with heavy rains from several days and onrush of water from the upstream. The Surma River was flowing above the danger level. However, the flood situation may be improved today.Â  Â In Kurigram, the flood situation has been improved slightly. But the flood-affected people are crying for relief, as they are facing crisis of dry food and pure drinking water.Deputy Commissioner (DC) of Kurigram ABM Amzad said that 20 metric tonnes of rice have already been allotted for the flood hit people. Locals said that the allocation is so insufficient than the demand, as about one lakh people have been victims of the flood. On the other hand, transplanted Aman and vegetables on at least 17 thousand acres of land have been affected by the flood, according to Department of Agriculture.