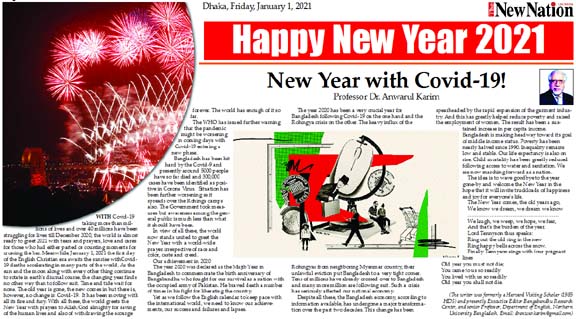 Professor Dr. Anwarul Karim :
With Covid-19 taking more than millions of lives and over 40 millions have been struggling for lives till December 2020, the world is almost ready to greet 2021 with tears and prayers, love and cares for those who had either parted or counting moments for crossing the bar. Meanwhile, January 1, 2021 the first day of the English Christian era awaits the sunrise withCovid-19 deaths accelerating in many parts of the world. As the sun and the moon along with every other thing continue to rotate in earth's diurnal course, the changing year finds no other way than to follow suit. Time and tide wait for none. The old year is gone, the new comes in but there is, however, no change in Covid-19.Â  It has been moving with all its fire and fury. With all these, the world greets the New Year with prayers to Allah/God almighty for saving of the human lives and also of withdrawing the scourge forever. The world has enough of it so far. Â
The WHO has issued further warning that the pandemic might be worsening in coming days with Covid-19 entering a new phase.
Bangladesh has been hit hard by the Covid-9 and presently around 5000 people have so far died and 300,000 cases have been identified as positive in Corona Virus.Â  Situation has been further worsening as it spreads over the Rohinga camps also. The Government took measures but awareness among the general public is much less than what it should have been.
In view of all these, the world now stands united to greet the New Year with a world-wide prayer irrespective of race and color, caste and creed.
Our achievement in 2020
The year 2020 was declared as the Mujib Year in Bangladesh to commemorate the birth anniversary of Bangabandhu who fought for our survival as a nation with the occupied army of Pakistan. He braved death a number of times in his fight for liberating the country.
Yet as we follow the English calendar to keep pace with the international world, we need to know our achievements, our success and failures and lapses.
The year 2020 has been a very crucial year for Bangladesh following Covid-19 on the one hand and the Rohingya crisis on the other. The heavy influx of the Rohingyas from neighboring Myanmar country, their unlawful eviction put Bangladesh to a very tight corner. Tens of millions have already crossed over to Bangladesh and many more million are following suit. Such a crisis has seriously affected our national economy.
Despite all these, the Bangladesh economy, according to information available, has undergone a major transformation over the past two decades. This change has been spearheaded by the rapid expansion of the garment industry. And this has greatly helped reduce poverty and raised the employment of women. The result has been a sustained increase in per capita income. Bangladesh is making headway toward its goal of middle income status. Poverty has been nearly halved since 1990. Inequality remains low and stable. Our life expectancy is also on rise. Child mortality has been greatly reduced following access to water and sanitation. We are now marching forward as a nation.
The idea is to wave goodbye to the year gone-by and welcome the New Year in the hope that it will invite truckloads of happiness and joy for everyone's life.
The New Year comes, the old years ago,
We know we dream, we dream we know
â¦â¦â¦â¦â¦â¦â¦â¦â¦â¦â¦â¦â¦â¦â¦â¦â¦
We laugh, we weep, we hope, we fear,
And that's the burden of the year.
Lord Tennyson thus speaks:
Ring out the old ring in the new
Ring happy bells across the snow.
Finally Tennyson sings with four poignant lines
Old year you must not die;
You came to us so readily
You lived with us so readily
Old year you shall not die.